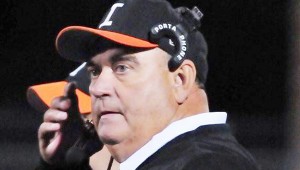 The baseball field dedication is still batting, but in a different inning.

The naming of the Ironton High School baseball field in honor of former coach and Hall of Famer Mike Burcham will be held this week but the ceremony will be on Friday instead of Saturday.

The Fighting Tigers play the St. Joseph Flyers in 5 p.m. start on Friday and the dedication ceremonies will be held approximately 10 minutes prior to the start of the game.

Burcham coached Ironton from 1967 to 1984. His teams posted a record of 319-123 and won the school’s only state championship in baseball when the Fighting Tigers captured the Class AA state title in 1972.

A former football and baseball standout at Ironton, Burcham returned to his alma mater and served as athletic director from 1972 until he retired from teaching. He remains as an assistant football coach on the Ironton staff.

A former catcher for the University of Rio Grande, Burcham still holds the all-time career home run record and was named to the school’s athletic Hall of Fame in 1976.

The Associated Press CINCINNATI — The Brewers opened the season by getting blown away. Ryan Hanigan hit two of Cincinnati’s... read more