Vikings cruise past Sciotoville in SOC 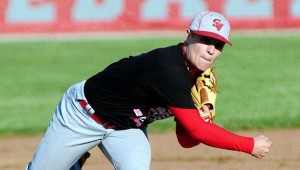 AID — The Symmes Valley Vikings decided to play the old game “double or nothing.”

The Vikings banged out 10 doubles including four by Nathan Dockery as they routed the Sciotoville East Tartans 24-0 in five innings Tuesday in a Southern Ohio Conference game.

“It’s nice to get one under out belt,” said Vikings’ coach Chad Renfroe. “We just need for these young kids to get some experience and confidence. We played a little better.”

The 16-hit attack backed the two-hit pitching of Cody Myers who struck out seven and walked two.

Dockery was 4-5 to key the offense. Evan Herrell was 2-2 with a pair of doubles, Hunter Boggs 2-3 and Luke Taylor and Alec Herrell were 2-4.

Myers walked and scored on Dockery’s first double to give the Vikings a 1-0 lead in the first inning.

The Vikings pushed the lead to 8-0 in the second inning.

Dillon Pelletir doubled, Evan Herrell walked and Alec Herrell had a two-run double. Myers and Dockery followed with doubles, Taylor eached on an error and scored on a wild pitcher.

The Vikings used seven hits and seven walks to score 13 runs in the third inning. Dockery had two doubles in the uprising and Evan Herrell added a double.

The final three runs scored in the fourth inning.

Myers walked, Taylor had an RBI double, Jacob Patterson reached on an error and Jordan Fulford hit into a fielder’s choice to drive in a run.

The Vikings visit Green Wednesday in a league game.

The Associated Press CINCINNATI — The last time the Reds got off to such a good start, they ended up... read more