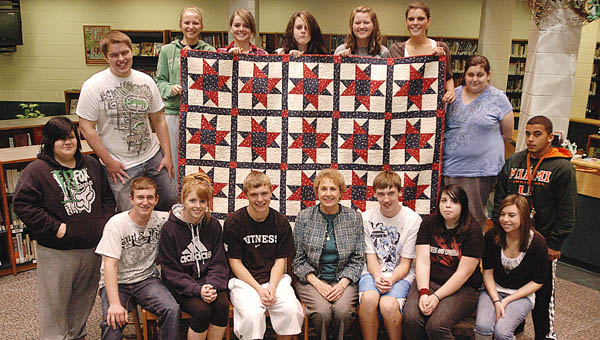 PROCTORVILLE — It was taking small squares of cloth and stitching them into a tapestry of accomplishment. That’s what happened when the Fairland High School students learned what it meant to make a quilt.

The project by the students of Pat Burriss, family consumer science teacher, was part of this spring’s community-wide read of Jennifer Chiaverini’s historical fiction, “The Lost Quilter.”

Set in the years just before the Civil War, “The Lost Quilter” is the story of a runaway slave who becomes a spy, detailing with the hardships and injustices endured by African Americans in the 19th century.

The book was chosen by Fairland High librarian Evelyn Capper “because of our connection with the underground railroad and the 150th anniversary of the Civil War.”

It was Capper who suggested the quilt project for Burriss’ students using one of the patterns featured in the novel.

“My healthy living class got involved in making squares for the quilt,” Burris said. “They thought it was wonderful. It went together like a puzzle.”

The pattern chosen was called “twin star” and the students got assistance from Jennifer McCormick, who conducts local quilting classes and Irene Hensley who did the actual quilting.

The community-wide read has reached out to civic clubs and businesses as well as the Fairland students who spend part of each homeroom reading the novel. All branches of the Briggs Lawrence Library have already featured the novel in their book clubs.

“I still have 40 books I could distribute,” Capper said.

On April 19 at 2 p.m. the high school varsity singers will present a concert of African American spirituals and songs of the Civil War era.

During the concert the students’ quilt will be on display.

“We set up machines every day and they couldn’t wait for fourth period to work on the quilt,” Burris said. “(They learned about) being able to work together in a project and seeing the end results. How beautifully something can turn out if you are able to have the initiative to do things. They were so proud. They gained so much pride and accomplished a lot. It was not just a sewing project. It was an experience I don’t think they will ever forget.”