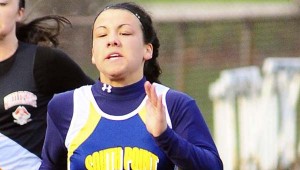 SOUTH POINT — Don’t be fooled by Kayla Fletcher’s 5-foot stature. There’s a lot of talent and energy in her.

Fletcher has so much talent and energy that she decided to tackle two sports this spring on the heels of an outstanding basketball season.

The South Point Lady Pointers’ senior multi-talent has been one of the dominant sprinters in track throughout her high school career. Last year she reached the state meet in the 100-meter dash and the long jump.

Fletcher is again running track but she has added softball to her spring schedule.

“I always played (softball) when I was younger. I got burned out on it. This was my senior year and my last chance, so I decided to play,” said Fletcher. “It’s hard to do both, but I love softball. I wish I played all the way through high school.”

Fletcher has made a difference in the Lady Pointers’ softball team batting in the leadoff spot and using her speed. She was 11 of 16 at the plate her first four games.

“Kayla Fletcher has been hitting the ball extremely well. I couldn’t ask for much more. She’s doing all this and this is her first year playing high school softball,” said Lady Pointers’ coach Tara Layne.

Although she has proven to be a solid softball play, Fletcher has made it known from the start where her allegiance lies.

“I put track first. It’s my priority,” said Fletcher. “It’s not that hard to go back and forth from one sport to the other. I’m doing softball but I’m focusing on both.”

Focusing on two sports might be a problem for someone else, but Fletcher takes it all in stride.

“It’s pretty normal. I’m used to doing a lot of different sports. I don’t train any different,” she said.

Since Fletcher went to the state meet last year, she has the possibilities of returning this year. However, she could be the spark the softball team needs to make the start tournament.

While spring sports are her focus right now, basketball still hasn’t faded. She plans on attending Marshall University and she has an open door to join the team.

“I’m still going to Marshall either way. I have to decide if I want to dedicate myself to (basketball). It’s up to me to decided if I want to play,” said Fletcher.

It’s understandable that Marshall would like to have Fletcher running the point guard position.

The District 13 coaches named Fletcher their top player in Divisions I and II and selected her as the representative to the annual North/South All-Star Game.

In the District 13 All-Star Game, Fletcher had 25 points, nine rebounds and six assists that led to her being named the game’s Most Valuable Player.

Since Fletcher may decide to skip college basketball and focus on her academics, she might need a venue to release all that extra energy. If that happens, she has an alternative plan.

“I guess I could try new sports in college and intramurals,” said Fletcher.

It’s a good bet she has the talent for whatever sport she chooses.