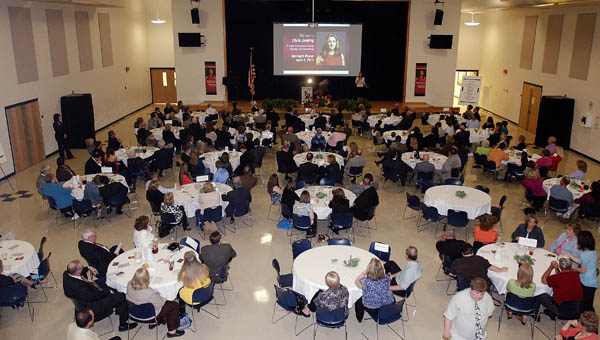 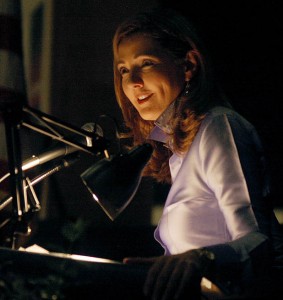 SOUTH POINT — A journalist who makes her living covering news all over the planet was in Lawrence County Friday for a different reason Friday evening.

MSNBC news anchor Chris Jansing, who hosts Jansing and Company, was the featured speaker at the Greater Lawrence County Chamber of Commerce Spotlight Dinner and Auction.

The event was held at the South Point School Cafetorium.

The dinner and silent auction were part of a fundraising effort by the chamber of commerce. The organization raised money for $500 college scholarships for a student at each of Lawrence County’s high schools. It also contributed $2,500 to Big Brothers Big Sisters of the Tri-State and set up and contributed $3,000 toward a scholarship in Bob Smith’s name at Ohio University Southern.

Smith is a former broadcaster who retired from WSAZ and is president of the chamber.

Jansing shared some of her experiences from her career in broadcast journalism.

The northeast Ohio native was part of a team that reported about a volcano in Iceland that erupted in the spring of last year. Hoping for a better story then her competitors, Jansing arranged to fly in a helicopter over the exploding volcano.

“First of all, it stopped air travel all around the world and I’m up flying above it. So maybe I’m not as smart as I think I am,” she said.

Later the pilot took Jansing back to the volcano. When they landed, she did a segment on a glacier near it.

“It’s all worth it though because how many people get to land on a glacier on top of an exploding volcano and have Brian Williams say nice things about you after it’s happened,” Jansing said.

Being near a volcano might be enough to put anyone on edge but Jansing said she is rarely nervous while doing her job. There have been a few times though when she’s been afraid.

Like recently when she was called on to cover the devastating earthquake and tsunami in Japan.

“I was at the airport getting ready to fly to the area of the reactor and we got a call that said, ‘don’t get on that plane,’ because it was more serious than we had been led to believe,” Jansing said.

For another story, Jansing was in Gaza when the terrorist organization Hamas bombed Hebrew University and seven people were killed. Jansing had been trying for months to get an interview with the man believed to have ordered the attack. Now she and her team were worried that if they went through with the interview, Israeli forces could target the building where they were in an effort to kill the man.

Only after the interview did her crew tell her that if she ever put them in a similar situation they would not speak to her.

Jansing’s career is not all danger, though. At the end of the month, she will head to England to cover the royal wedding of Prince William and Kate Middleton. A short time later she has an assignment in Rome.

“It’s a rough life but someone’s got to do it,” Jansing said.

The journalist congratulated the chamber and those in attendance for raising money to support education.

WSAZ anchor Tim Irr, who served as master of ceremonies for the evening, echoed that sentiment.

“The fact that everybody’s here tonight to help out students and parents, of course, on their journey ahead in school is a very big deal and we want to thank you for being here,” Irr said.