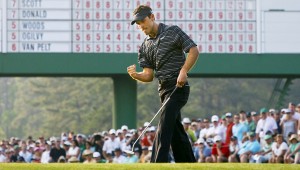 Charl Schwartzel took the lead with a birdie on the 17th green during the final round of the 75th Masters Tournament at Augusta National Golf Club in Augusta, Georgia, on Sunday. (MCT DIRECT)

On an amazing Sunday at Augusta National, where the roars came from everywhere and for everyone and didn’t stop until it was over, Schwartzel emerged from the madness by becoming the first Masters champion to close with four straight birdies.

His final putt from 20 feet curled into the side of the cup for a 6-under 66, the best closing round at the Masters in 22 years. It gave the 26-year-old South African a two-shot victory over Australians Adam Scott and Jason Day.

“Just an exciting day,” Schwartzel said. “So many roars, and that atmosphere out there was just incredible. A phenomenal day.”

Indeed, this final round had it all.

First came a fist-pumping charge by Tiger Woods, who erased a seven-shot deficit in nine holes only to go flat on the back nine. Then came the stunning collapse of 21-year-old Rory McIlroy, who put his name in Masters lore for all the wrong reasons.

Still leading by one shot as he headed to the back nine, McIlroy hit a tee shot next to the cabins left of the 10th fairway and twice hit a tree to make triple bogey. He three-putted from 7 feet for bogey on the 11th, four-putted from about 12 feet on the next hole and buried his head into his forearm as the shock began to settle in.

McIlroy shot 80, the highest final round by the 54-hole leader since Ken Venturi in 1956. Not since Jean Van de Velde at Carnoustie had someone blown at least a four-shot lead going into the last round of the major.

So wild was this steamy afternoon that eight players had at least a share of the lead on some point during the back nine. The steady hand came from Schwartzel, whose only bogey came on the fourth hole as this Masters was just getting warmed up.

He got up-and-down from behind the 15th green for birdie to briefly tie for the lead, only for Scott to stuff his tee shot into 2 feet up ahead on the par-3 16th. Schwartzel answered with a 15-foot birdie to catch Scott atop the leaderboard again.

Then came the pivotal 17th, where Schwartzel made a 10-foot birdie. It was the first time all day he had the lead to himself, and he finished it off in style.

South Africans now have won two of the last three majors, following Louis Oosthuizen winning at St. Andrews last summer. This one came on the 50th anniversary of Gary Player becoming the first international player to win the Masters.

“I am absolutely delighted for Charl and South Africa. Congratulations and very well done to him. That is how you finish like a champion!” Player said on Twitter.

In so many respects, this looked more like 1986 when Jack Nicklaus charged on the back nine to win a sixth green jacket over a Hall of Fame cast of contenders. There were twice as many possibilities at this Masters, though, from Woods and former Masters champion Angel Cabrera, from Geoff Ogilvy and Luke Donald, from K.J. Choi and Bo Van Pelt, who made two eagles on the back nine.

Schwartzel set the tone early when he chipped in from some 75 feet across the green for birdie on the opening hole, then holed out from the fairway on No. 3 for eagle. Just like that, McIlroy’s four-shot lead was gone.

The cheers were impossible for McIlroy to ignore.

From the second green, where he was scrambling to make par, McIlroy could hear the noise ahead of him for Schwartzel’s eagles. Moments later came another roar to his right on the seventh green, where Woods stuffed one close for another birdie.

The biggest boom from the gallery came on the par-5 eighth, when Woods knocked in an eagle putt to reach 10 under and tie for the lead. There was no mistaking that sound, or who it was for.

Over the next few minutes, more cheers could be heard from all corners of Augusta each time Woods’ score was posted on a leaderboard. He still had the back nine to play, and momentum was on his side.

Not for long, though.

He missed a 3-foot par putt on the 12th, failed to birdie the par-5 13th with a 7-iron for his second shot. Then, after twirling his 7-iron with a shot so pure it settled 4 feet away on the par-5 15th, he missed the 4-foot eagle putt.

Woods closed with a 67, his best final round ever here. But he shot a 36 on the back nine, and that doesn’t win the Masters, certainly not this one.

“I got off to a nice start there and posted 31,” he said. “And then on the back nine, could have capitalized some more.”

Schwartzel finished at 13-under 274 and moves to No. 11 in the world, making him the No. 1 player in South Africa. He becomes the sixth South African to win a major.

“It’s been such a short time to think about what can happen. It’s a dream for me,” Schwartzel said. “It’s obviously the highlight of my golf career, by a long way. I always thought if there was one I would win, it would be this one.”

For Scott and Day, it was bitter disappointment for themselves and their country. The Masters is the only major an Australian has never won, and it has become a rallying cry for so many players who watched Greg Norman endure years of heartache.

Scott, who switched to a long putter in February, took the lead for the first time with a short birdie on the 14th and had the look of a winner with his tee shot to tap-in range on the 16th, and a clutch par save from the bunker on the 17th.

He missed his 25-foot birdie putt on the final hole that he ran 4 feet by and settled for a 67.

“I don’t think I can ask for anything more,” Scott said. “I had a putt at it at the last — not my best, but everything else was pretty good today.”

Day came to life at the end with consecutive birdies that allowed him to shoot 68 and join Scott at 12-under 276. He hugged his wife before going into the scoring hut, only to see Schwartzel play the 18th without any drama.

“I couldn’t do any more than what I just did today,” Day said. “Charl played even better golf.”

Woods tied for fourth at the Masters for the second straight year, joined by Ogilvy (67) and Luke Donald (69). Ogilvy ran off five consecutive birdies on the back nine — unforgettable at any other Masters but this one filled with so many highlights. Donald was in the mix until hitting 9-iron into Rae’s Creek on the 12th for double bogey.

He rebounded beautifully, however, and showed his greatest emotion on the 18th. With an awkward lie near the bunker, he scooped a shot that hit the flag and bounced back off the green, and Donald chipped in for birdie.

Ultimately, though, it was Schwartzel slipping into a green jacket.

For the Americans, it’s the first time they have not held any of the four majors or the Ryder Cup.