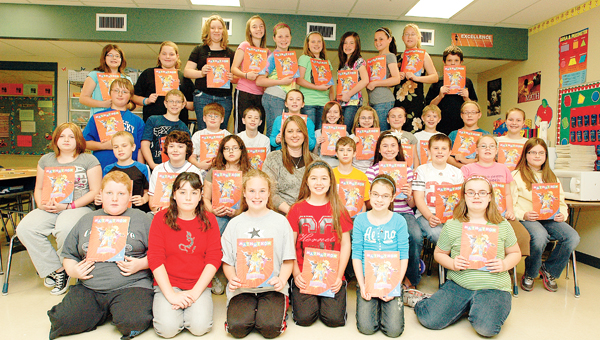 COAL GROVE — A group of fifth graders at Dawson-Bryant Elementary School used their sharp math skills for something other than good grades recently.

The students got sponsors, collected pledges and completed Math-A-Thon workbooks provided by the hospital.

“This is a very important cause,” Wagner said. “I actually did this at another school I worked at before. I had a good experience with it and I had wanted to do it here.”

The students raised $1,535, more than double their original goal of $500, and Wagner said she has already signed up to do the program again next year. The top raiser, Jesse Ferguson, brought in $125 for the cause.

“(St. Jude’s) sent a DVD we all watched that explained about the hospital, and it had several of the patients on there,” she said. “The hospital explained that $45 pays for a treatment for one child, so most of my kids tried to get at least $45 so they would know that they would pay for a treatment.”

Wagner said that even though there were prizes for motivation, like T-shirts, book bags, extra credit and a free lunch for top sellers, she said they all sincerely wanted to help the children at St. Jude’s. She said before she announced the project, she hung St. Jude posters around her classroom and one of her students, Austin Bridges, noticed it.

“Before I even told anyone about this, (Austin) saw the poster and he came up and said, ‘What can I do to help?’ He didn’t even know what the project was.”

Rachel Unrue and Ali Waller were two of the top raisers, and they both said the project is important.

“I liked it because it helped,” Ali said. “You want them to have a good life just like you do.”

“If you ever get sick, you would want someone to help you too,” said Rachel.

Another student, Caleb Hackworth, said he was surprised that just 38 students could raise that much money.

He also had some advice for any other children raising money for special causes.

“Just try your hardest to raise as much money as you can.”

City not admitting guilt in Roe case The family of Aaron Roe received $90,000 in its settlement with the City... read more