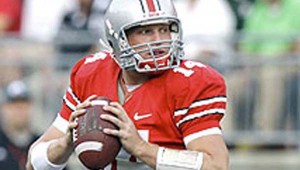 Joe Bauserman is one of four quarterbacks looking to fill-in for starter Terrelle Pryor who is suspended for the first five games. (MCT Direct)

COLUMBUS — It’s a typical spring practice at Ohio State and yet nothing seems typical about it.

Over near a sideline, Terrelle Pryor, the three-year starter at quarterback, is balanced on one knee, playing catch with a teammate. Coach Jim Tressel is no more than a few feet away and is watching him toss the ball, over and over and over again.

Thirty yards away, four other quarterbacks are taking their turns running the offense. Joe Bauserman, Kenny Guiton, Taylor Graham and Braxton Miller alternate snaps in a drill with just three receivers matching up with defenders.

One of the four will be well known to Buckeyes’ fans soon enough. But on this April day, with a torrent of rain visible through an open door at the Woody Hayes indoor practice field, they’re just four guys trying to learn the plays and catch a coach’s eye.

With Pryor skipping spring workouts due to surgery, and suspended for the first five games this fall, somebody is going to win the starting job. Right now, however, no one has any idea who has the inside track.

“It is critical by the end of 15 (spring) practices that we do start thinking about some sort of a pecking order,” Tressel said.

The problem is, he doesn’t have one right now.

Pryor isn’t playing this spring after having postseason foot surgery. He’s no longer wearing a protective boot and appears healthy enough to take snaps. But, he’s not taking any contact this month, even though his presence looms over workouts. He counsels the other signal callers, stands maybe 10 yards behind them while they run plays with the full first-team offense and trades comments continually with Tressel.

Baby steps have been taken. Early on, the four potential replacements couldn’t get a snap without dropping it.

“The first couple of days, there was a fumbled snap here and there. But ever since, we’ve kind of got a comfort level with all the quarterbacks,” center Mike Brewster said.

“Now, no matter who’s in, it’s really not affecting our play.”

Pryor, once the most acclaimed quarterback recruit in the country, will also miss the first five games of his final season as he serves an NCAA-mandated suspension after it was discovered he and several teammates had received improper benefits from the owner of a Columbus tattoo parlor.

So Bauserman, Guiton, Taylor or Miller will likely hold the hopes of the 2011 Buckeyes in their hands at least until Pryor makes his season debut on Oct. 8 at Nebraska.

“It’s going to be fun to watch,” Tressel said of the quarterback sweepstakes before spring practices even began. “I’m going to have as much fun watching as you (reporters) are — as to who’s going to step up and emerge.”

— Bauserman (6-foot-1, 230 pounds) is a fifth-year senior who pitched for three seasons in the Pittsburgh Pirates organization. Majoring in fisheries and wildlife, he’ll turn 26 this fall. He has the most game experience of the four, with 47 passes thrown (completing 25) in 24 career games. He has a good arm, limited mobility and some would say he’s decent at all and outstanding at none of the skills it takes to be a quarterback.

— Guiton (6-2, 195) is a redshirt sophomore who can run in addition to throw. Ohio State coaches like his awareness in the pocket. He’s only thrown two college passes — one was completed, one intercepted — but might have the edge coming out of spring drills because the Buckeyes, with heavy losses at wide receiver, figure to stay on the ground more early in the year.

— Graham (6-4, 230) is the son of former Ohio State quarterback Kent Graham, who spent 11 seasons in the NFL. His son is a redshirt freshman who is a prototypical pocket passer. He’s tall enough to see over the line and has a strong arm.

— Miller (6-3, 205) graduated from high school early so he could come to campus in January and practice this spring. An acclaimed recruit like Pryor, a better comparison to his style of play would be former Buckeye Troy Smith. Still learning the vagaries of footwork, checkoffs and progressions, he’s a work in project who the coaching staff believes has a big upside.

“If he keeps making plays there’s no reason why (he couldn’t start),” lineman J.B. Shugarts said. “If he’s the guy, he’s the guy. The best quarterback is going to play.”

But don’t expect any decisions any time soon. Tressel, who also must sit out the first five games for hiding the fact he knew about his players’ involvement with the tattoo-shop owner, isn’t in any hurry to anoint a starter until preseason workouts in August.

“Until we get to the fall,” he said, “you can’t put the total onus on the quarterbacks’ performance.”