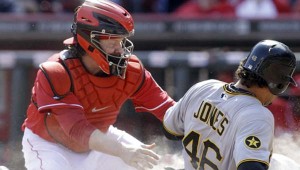 In all four of his games this season, the Reds right-hander has needed one inning — one long, bad inning — before he starts retiring batters in order. It happened again on Sunday, when the Pittsburgh Pirates opened the game with back-to-back homers and held on for a 7-6 win.

“You hope it doesn’t turn into a mental thing,” manager Dusty Baker said. “Everybody else is aware of it, and then you become aware of it.”

Everyone’s aware that something’s off the first time the former All-Star takes the mound. In his four games this season, Volquez has an ERA of 29.25 in the first inning. It’s 1.93 the rest of the way.

Volquez got an extra day of rest for the game because of a stiff neck, and thought that was a factor in his slow start on Sunday.

“A little,” he said. “I was afraid to throw my fastball in the first inning. After that, I just let it go.”

Andrew McCutchen homered to right on his third pitch of the game, the outfielder’s seventh leadoff homer. The crowd of 32,105 was still murmuring when Jose Tabata homered on the next pitch as well, earning a place in Pirates history.

The only other Pirate duos to lead off a game with homers: Pete Coscarart and Jim Russell against Boston in 1945, and Omar Moreno and Johnny Ray against Houston in 1982.

It was the second time this season that Volquez gave up back-to-back homers to start the game — a mystifying statistic.

“We’re trying to figure out why,” Baker said. “If we had the answer, it wouldn’t happen. We’ve got to figure it out, because it taxes the bullpen and puts pressure on the team.”

Volquez threw hard — his fastball hit 96 mph — but had poor control at the outset. After the homers, he walked Lyle Overbay on four pitches. Neil Walker doubled off the wall in center, and Volquez walked Garrett Jones and Chris Snyder to force in a run. Cedeno hit a sacrifice fly to warning track in center for a 4-0 lead.

It had happened again.

“I think I’ll be better the next time. I’ve got an idea,” Volquez said. “I was still a little tight in the first inning. After that, I was ready to go. I was trying to be too perfect. Next time, I’ll just throw my best fastball and say, ’Here, hit it.”’

On opening day, Volquez also opened the game by giving up back-to-back homers to Milwaukee’s Rickie Weeks and Carlos Gomez. The Reds rallied in the ninth for a 7-6 win.

This time, they came up one hit short.

Jonny Gomes and Miguel Cairo had solo homers off Jeff Karstens, who made his first start of the season. Jay Bruce had an RBI single and a solo homer that tied it 6-all in the seventh inning.

McCutchen put the Pirates ahead to stay with his third hit of the game, a single in the eighth off Logan Ondrusek (2-1).

Closer Joel Hanrahan came on with two aboard in the eighth and got Scott Rolen to line into a double play, started by shortstop Ronny Cedeno’s diving catch. The Reds then loaded the bases with two outs in the ninth, but Hanrahan got Drew Stubbs to fly out, securing his fifth save in five chances.

Bruce made the second out in the ninth after beating out his soft grounder for an infield single. The throw to first was high and got away briefly. Bruce made a quick move toward second, realized he didn’t have a chance and was tagged out trying to get back to first.

“Your first instinct when the ball goes over their head is to go,” Bruce said. “You’re caught in the middle. You’re kind of in no-man’s land.”

NOTES: Karstens lasted 4 1-3 innings, giving up eight hits and five runs. He matched his career high with six strikeouts. … It was Ondrusek’s first career loss. He’d won his first seven decisions. … In first innings this season, Volquez has thrown 30, 44, 21 and 33 pitches. … The last pitcher to give up back-to-back opening homers twice in a season? Kansas City’s Chad Durbin in 2000, according to the Elias Sports Bureau. … RH Homer Bailey made his first rehab start at Triple-A Louisville and threw 62 pitches in five scoreless innings, allowing two hits. … 2B Brandon Phillips was out of the lineup for the third straight game with a sore groin. He took infield practice.