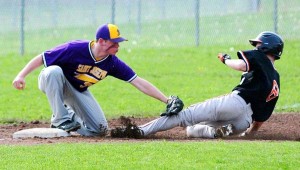 St. Joseph Flyers’ third baseman T.J. Young, left, puts the tag on a sliding Steve Easterling (8) of the Ironton Fighting Tigers during a game on Tuesday. Easterling was out on the play but went on to pitch a three-hitter as Ironton won 2-1 with a run in the bottom of the seventh inning. (The Ironton Tribune/Kent Sanborn of Southern Ohio Sports Photos.com)

It was just what an inner-city rivalry should be.

The Ironton Fighting Tigers scored a run in the bottom of the seventh inning to edge the St. Joseph Flyers 2-1 Tuesday behind the 3-hit pitching of Steve Easterling.

“It was a well-played game,” said Ironton coach Tobey Schreck. “Both pitchers threw well. We got some runners on and they made a couple of mistakes and that was the difference.”

Ironton’s winning rally began with one out when Nick Culbertson reached on an error.

Brandon Leach doubled to put runners at second and third. St. Joseph pitcher Tanner Riley got a ground out but hit Korey Kellogg to load the bases with two outs.

Tommy Waginger hit a ground ball that was misplayed for an error allowing Culbertson to score the winning run.

Easterling got the win as he struck out seven and did not walk a batter. Riley gave up just six hits, struck out six and walked one.

“We didn’t hit the ball. We felt if we could get some people on we could make some things happen,” said Flyers’ coach Greg Bryant. “But give their pitcher credit. He threw strikes and they made the plays.”

Ironton (4-4) took a 1-0 lead in the third inning when Waginger and Easterling hit back-to-back two out doubles.

The Fighting Tigers play in the East Carter Tournament Friday and Saturday (doubleheader). The Flyers visit Rose Hill (Ky.) at 7 p.m. on Tuesday in Central Park.

One out when winning run scored.

The Associated Press CINCINNATI — The defending NL Central champions are tied for first place and barely over .500. Manager... read more