Taylor finds results were worth the wait 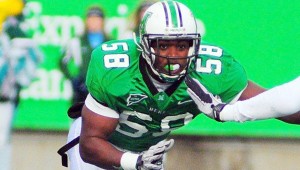 HUNTINGTON, W.Va. — It has been said that good things come to those who wait.

If that’s the case, Jeremiah Taylor can expect great things in his future.

Taylor played football and basketball at South Point four years ago. Although he was an All-Ohio player in both sports, he opted to skip college and enter the workforce.

But working every day at the Sitel Contact Center and trying to raise a family just wasn’t working.

“I did the job thing, working at Sitel and supporting my family. That wasn’t working with me. I decided to go back to school,” said Taylor.

So, Taylor decided to enroll at Marshall University and pursue a college degree.

Despite the drive to attend school in hopes of landing a better job, football remained in the back of his mind.

Marshall football coach Mark Snyder wanted Taylor to play once he was enrolled. But Taylor wasn’t ready to play football just yet.

“I wanted to get the academic thing straight first and then get back into football,” said Taylor.

Although Snyder resigned at the end of the season, Taylor showed up for spring football with a new group of coaches led by head coach Doc Holliday.

“They gave me a shot,” said Taylor. “(During spring practice) I was more like a utility guy. They didn’t have that many players, so I was the guy when they needed someone.”

Taylor bounced around on the offensive line during last year’s spring practices before finally ending up on the defensive side.

When practice began in the fall, Taylor started to get comfortable with his return to football and started making plays. He eventually worked his way into some playing time.

“I had the confidence. It never left me. I still felt I had the ability to play at that level. They told me they liked me.”

The return to football was much more difficult than just finding a position and getting used to the contact again.

The 6-foot-4 Taylor came into the spring at 280 pounds. He is now down to 250 and much stronger after a year in the weight room.

“It was unbelievably hard. The workouts were grueling. I hadn’t done anything since high school. I knew setting out the weight would come off and I was determined to lose it,” said Taylor.

“Coming off the couch and doing workouts was a hard adjustment. It was a culture shock from getting up when I wanted to getting up at 5 o’clock in the morning. I was sick the first two weeks. But we got it going and it’s worked out pretty good.”

Taylor has been playing the rush end on defense and looks to be in line for a starting job. With a year under his belt, Taylor is expecting a lot from himself.

“I want to be more productive. I want to have more sacks and maybe make it to a bowl game. I think those are obtainable goals,” said Taylor.

Only time will tell, and Jeremiah Taylor seems to have time on his side.