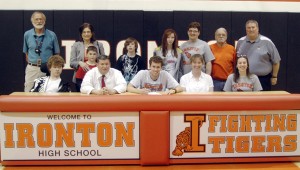 Gary Monroe has spent the past four years running track and cross country at Ironton. He’ll be running a little further the next four years.

Monroe will add more miles not only in his workouts but from home to school after signing with the Morehead State Golden Eagles and coach Tommy Barksdale.

But mileage by foot or car doesn’t bother the Fighting Tigers’ senior running standout who set a school record last year in the 1600 with a 4:21 time at the regional meet and finished eighth in the state meet.

“It’s an easy drive (to Morehead),” said Monroe. “It’s a good college and an excellent program. I think I’m far enough away but I’m still close enough to get home if I need to.”

Monroe said he normally runs up to 60 miles a week, but he said his college workouts will be even more demanding.

“I’ll run between 70 to 75 miles the first week. It’ll be tough, but I’ll just have to budget my time better,” said Monroe.

Monroe not only set a record in the 1600 for Ironton but he is the anchor for the 4×800 relay team that holds the Ironton record in that event. Also on the team are Pierce Reeves, Adam Stumbo and Dustin Moritz.

“They have great academics. If it was just about running, I would have gone to Shawnee,” said Monroe. “I like the team, I like the place and I like coach Barksdale and what he’s doing. I really didn’t even think about it being a Division I school.”

Monroe said a lot of his success can be attributed to the Ironton program and running coach Tim Thomas.

“I wouldn’t be where I’m at if not for (coach Thomas),” said Monroe.

“I was just here to have fun and my freshman year I got spanked on the track. I had a 2.7 GPA (grade point average), but because of running and the coaches always on me, I realized I’d better get it in gear. Now I’ve got a 4.3 GPA and it’s all because of running.”

Monroe is undecided on a major but said he is leaning toward teaching or physics.

Gary is the son of Gary Monroe of Ironton and Angie Martin of Piketon.

Taylor finds results were worth the wait