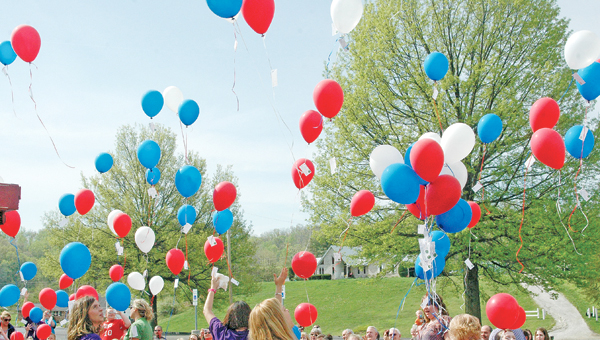 Up and away: Students and staff of the Rock Hill Child Development Center watch as red, white and blue dots fill the sky during a balloon launch Monday morning. Lori Kersey/The Tribune

PEDRO — It was both a way of celebrating students and a last hurrah for the Rock Hill Child Development Center.

The preschool kicked off Week of the Young Child Monday with a block party and balloon launch. While the staff and parents celebrated the children and their education, they were also made aware that the center as they know it will be closing this year.

Due to budget constraints, five classes from the preschool will be cut. The remaining two classes will be taught at the Rock Hill Elementary School.

The theme for this year’s week, which can be celebrated during any week in April, is Early Years are Learning Years.

Besides the block party, the center will also celebrate the week with a science experiment day and a literacy day.

Michele Dickess, director, said the week is about valuing the children and the celebrating their education. Statistics show that children who participate in a preschool program have better test scores later in life, she said.

Rock Hill superintendent Wes Hairston told those gathered that the staff at the preschool does a great job. He encouraged people to contact officials from the state government to tell them of the importance of early education.

The state only funds two of the preschools seven classes. The rest of the classes at the school had been funded from the district’s general fund, something that Hairston said was not a good business practice.

Hairston said it’s disappointing that the state does not fully fund preschool.

“It’s a tragedy,” Hairston said after the ceremony. “There are only six states in the United States that fund preschool.”

The district hopes to one day find a way to fund it completely, he said.

Boil-water advisory in place for Ironton