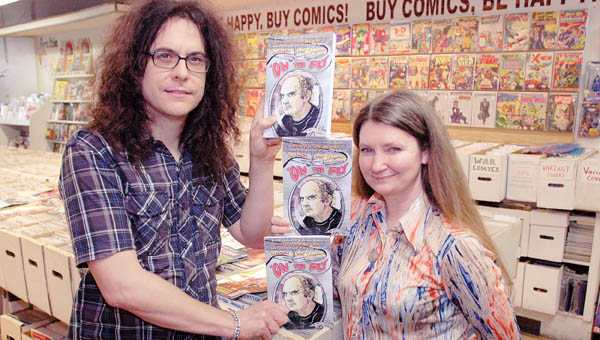 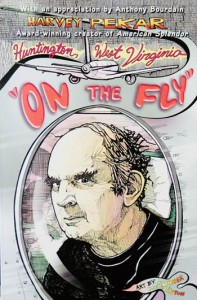 HUNTINGTON, W.Va. — Shayne and Kathleen don’t wear capes or bright costumes. They don’t have super-strength or X-ray vision. They don’t even have secret identities or fight crime under the cover of night.

It is however, because of their everyday lives that the two ended up in a graphic novel written by one of the comic book world’s most familiar everymans, the late Harvey Pekar.

“We didn’t know he was writing the comic about us at the time,” recalled Kathleen Miller, owner of Comic World in Huntington. “It was afterwards that he called us up and told us.”

Pekar’s work, “Huntington, WV ‘On the Fly,’” just released on Tuesday, features Kathleen and Proctorville native Shayne Barker. In true Pekar fashion, the book is about everyday people and ordinary events that he encountered while visiting Huntington in 2006 for a book festival, including a lengthy vignette about his involvement in a film written by Barker.

An underground writer from Cleveland best known for his autobiographical comic book series “American Splendor,” Pekar met the two when they showed up in his hometown in 2006 asking him to play a role in a film they were making called “The Comic Book Lady.”

“I had to work up the nerve,” Barker said. “You can read about that. It’s in the comic and he shows me asking him and him saying ‘sure’. He was totally cool about it. He didn’t need anything. He just said, ‘Yeah I’ll do it because I’ll be in Huntington and I’ve got free time.”

“We were super excited,” Miller said. “All the way back from Cleveland, the whole drive back, we were like, ‘Harvey’s going to be in our film!’”

Pekar arrived in Huntington in April for the book festival and acted in the film as promised, although, it wasn’t so much acting as it was Pekar just being himself.

He starred opposite Miller, who played a comic book store owner in the fictional film.

“He basically played himself,” Barker said. “The first thing I wrote, we chucked.”

For the film Pekar played a customer who, in one scene, is stressed out about having conflicting flight itineraries, which was a real concern of Pekar’s at the time.

When Pekar finished his role in the film and concluded his lectures for the book festival, he headed back to Cleveland.

The tale became even more surreal when Barker and Miller found out Pekar had been so inspired by his trip to Huntington, he wrote about it. Pekar had originally wanted to use the stories in his “American Splendor” series, but because of length, complied them into a graphic novel instead.

“He said he had such a good time being in the movie, he thought there was a really interesting story here so he wrote it,” Barker said. “It’s about common everyday people he knew.”

Miller said Pekar had expressed interest in coming back to Huntington for the book’s release, but died in July 2010 before it was published.

To celebrate Pekar’s life and the release of “Huntington, WV ‘On the Fly,’” Miller’s store, Comic World, will host an open house with refreshments from 6-8 p.m. on Friday at 1204 Fourth Ave. The event is coincidentally on the fifth anniversary of Pekar’s appearance in Huntington.

“I think overall, Harvey liked his experience in Huntington,” Barker said. “I don’t know if the book really clarifies that as much as I would like for it to for the locals. Harvey was brutally honest. If he saw something negative, he wrote it. If he saw something positive, he wrote it. So it’s not like he had anything against Huntington over other things, he just says, ‘This is what’s positive, this is what’s negative.’”

Barker also said he thinks Pekar’s work, because it is about the everyday struggles and happiness of real people, will endure.

“People are going to be able to relate to that.”

A Huntington, W.Va. man finds himself in the Lawrence County Jail after a judge said he showed up to court... read more