Bailey only one happy with Reds-Astros rainout 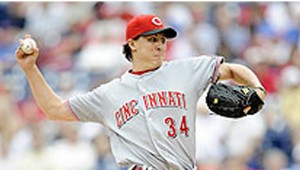 The Cincinnati Reds game with the Houston Astros on Monday was postponed due to rain and will be made up on Thursday since both teams are off. With the change in schedule, pitcher Homer Bailey (left) will not make a rehab start on Thursday but instead come off the disabled list and make his first start of the year. (MCT DIRECT)

CINCINNATI — Homer Bailey might be the only person around Cincinnati who didn’t mind another day of steady rain.

The right-hander will get to avoid one more minor league start and return to the Reds’ rotation this week, thanks to the wet weather. A forecast of steady rain all night prompted the Reds to postpone their game against the Houston Astros on Monday, more than three hours before the scheduled start.

The game is to be made up on Thursday afternoon, which had been a day off for both teams.

Bailey, who has spent the season on the disabled list with a shoulder problem, was scheduled to make one final rehab start at Class A Dayton on Thursday while the Reds were off. Now that they’re playing, he’ll start against the Astros instead.

“What do they say, rain is a good thing?” Bailey said. “I was happy to hear that. I felt ready, but there had to be one more start (in Dayton) because of the off day. I felt a little bummed out about it. I’m lucky things worked out.”

Cincinnati had the wettest April in its recorded history. May isn’t starting much better.

Bailey and right-hander Johnny Cueto are coming back from shoulder problems that sidelined them during spring training. Bailey is further along, going 2-0 with a 0.54 ERA in three minor league starts. He gave up only 11 hits and one earned run in 16 2-3 innings, striking out 14.

“I’m definitely glad I can be back at this level of competition, more than anything,” Bailey said. “I feel prepared. I went down and thought I threw well in all my rehab starts. Everything has progressed really well. I’m ready to step back in.”

Manager Dusty Baker plans to move Sam LeCure back into the bullpen when Bailey is activated. One of the relievers will get sent to the minors. The Reds figured Bailey might as well make his next start in Cincinnati instead of Dayton.

“He was scheduled to throw Thursday anyway, and he didn’t necessarily want another rehab assignment,” Baker said. “It’s just better for our situation. He was patient. He worked very hard. Now, it’s a go.”

It was the first postponement for both teams this season. Rain moved into the area about three hours before the scheduled start and was expected to stay all night. There have been 18 postponements in the major leagues this season, according to STATS LLC, three short of last year’s total.

The quick postponement allowed both teams to rest their starters. Cincinnati’s Mike Leake and Houston’s J.A. Happ were able to get light workouts and rest for Tuesday’s game. The Astros are pushing each of their starters back one day but staying in order.

Happ went into the outfield at Great American Ball Park and played catch and ran in the rain, trying to stay loose on his unexpected day off. He was glad the game was called early, allowing him to avoid a long wait in the clubhouse.

The postponement gave Astros left fielder Carlos Lee another day to recover from a ribcage injury. He hurt his left side when he ran into shortstop Angel Sanchez during the seventh inning of a 5-0 win over Milwaukee on Sunday, and was taken to a hospital for tests that found no fracture.

Lee was expected to rejoin the team on Monday evening.

“He’s still stiff and sore, but we’re glad to hear the CT scan was negative and also the X-rays were negative,” manager Brad Mills said. “I think we’ll check him out and see how he is and go from there.”

NOTES: Jason Bourgeois was scheduled to start for Lee in left field on Monday. … It was only the fourth time in nine seasons that a game was postponed at Great American. … The Reds are 2-1 against the Astros this season and 24-10 over the last three seasons. They’ve won 12 of their last 18 against the Astros. … Baker had planned to start Edgar Renteria at third base on Monday in place of Scott Rolen, who’s on the DL. Instead, Baker had him at shortstop. “I changed my mind,” Baker said. “He’s not really comfortable there yet.”

Redwomen get 3 wins at BC tourney

By JIM WALKER Tribune Sports Editor CANNONSBURG, Ky. — It might have seemed like a long day for the Rock... read more