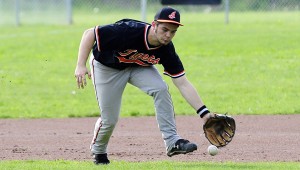 Hey, there’s nothing to this pitching thing.

Okay, so maybe pitching is one of the most difficult things anyone can do when it comes to baseball, but Ironton sophomore Nick Culbertson made it look easy as he won his first career varsity start on Monday when the Fighting Tigers beat the Raceland Rams 8-1.

“This was the first real chance to pitch Nick and he did a nice job,” said Ironton coach Tobey Schreck. “We finally got to string some games together and we needed someone to throw and he stepped up.”

Culbertston struck out two, walked two and gave up just four hits in going the distance.

Ironton (6-6) got a run in the first inning when Steve Easterling singled, went to third base on a pair of wild pitches and scored on an error.

Easterling and Tommy Waginger both reached on errors and scored on a triple by Jonathan Williams. Brandon Leach followed with an RBI single.

Two more runs came across in the sixth when Kellogg singled, Salyers walked and Waginger had a two-run double.

Ironton was the victim of two tough losses on Friday and Saturday.

On Friday, Ben Haer had a three-run double in the sixth inning that lifted the Huntington Highlanders to a 4-2 win.

Leach doubled and Jordan McMaster singled to give Ironton a 1-0 lead in the second inning.

Huntington got two runs in the fourth on singles by Elias Haikal, Zach Bailey and Anthony Brunetti and Trace Dempsey’s ground out.

But Ironton tied the game in the fifth when Salyers singled, stole second and Williams had an RBI single.

Haikal and Dempsey walked and Brunetti was hit by a pitch to load the bases in the sixth for Huntington to set up Haer’s two-out hit.

It was more tough luck on Saturday when Brennan Howard hit a three-run homer to cap a four-run third inning that gave Portsmouth a 4-3 win.

Ironton went up 1-0 in the first on walks to Kellogg and Waginger and Salyers’ base hit.

The Fighting Tigers added a run in the second on a walk to Culbertson, an error and McMaster’s base hit.

After the Trojans took a 4-2 lead, Ironton got a run back in the fourth on a walk to Culbertson and a double by McMaster.

Salyers again went 2-4 and McMaster 2-3 in the loss as Ironton out-hit Portsmouth 8-5.