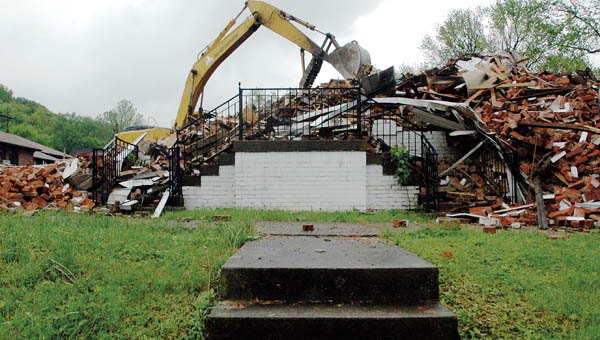 The front steps are all that is recognizable as construction workers tear down the Dennis J. Boll Group and Shelter Home and surrounding houses along Ninth Street Wednesday afternoon.

With the demolition of some houses the former old group home, the commercial development of property on Ninth Street in Ironton is one step closer to becoming a reality.

The former Dennis J. Boll Group and Shelter Home at the corner of Ninth and Vernon streets as well as four houses in the area, was demolished this week.

Old Engineer Property LLC, an entity made up of the Ironton Port Authority, the Lawrence County Port Authority, the Ironton-Lawrence County Community Action Organization and the Lawrence Economic Development Corporation, owns the property and has been working since 2009 at acquiring other properties in the area for development, said Ralph Kline, assistant director of the CAO.

“There are some other (properties) that will be bid out (for demolition) in a separate contract,” Kline said. “At this point in time we’re working with developers and marketing the site.”

Other properties include the one-time armory and the former county engineer’s garage.

Possible developments for the area include a hotel, which Kline said was identified as a need for the city. Old Engineer Property is also looking at potential retail development in the area, he said.

Getting ready for some heavy duty cleaning

If April showers bring the flowers, what do May monsoons do? Make pulling weeds go quicker. Or at least that’s... read more