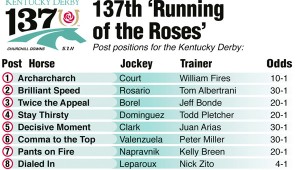 Table with post positions for the 137th running of the Kentucky Derby in Louisville, Ky.

LOUISVILLE, Ky. (AP) — To go or not to go. Uncle Mo’s connections still weren’t saying whether the talented colt will run in Saturday’s Kentucky Derby.

The sleek bay colt was recovering from a stomach ailment, but looked good as he galloped over the Churchill Downs track on Thursday, though appearances could be deceiving. Uncle Mo looks about as exotic as his name — average size, with no distinguishing marks like the white splash on Zenyatta’s forehead. But his power is apparent as soon as he starts running.

Owner Mike Repole anxiously awaited results from the latest vet exam, and promised to end the drama by announcing a decision Friday.

Repole said he won’t sacrifice Uncle Mo’s health to satisfy his 30-year dream of having a horse in America’s greatest race. Either way, he won’t be shut out. He has Stay Thirsty in the full field of 20 horses.

Still, the fast-talking Queens native, who got rich selling his Vitaminwater company to Coca-Cola, doesn’t want to leave his best horse in the barn.

“It’s tough,” he said. “Racing needs superstars and if he’s 100 percent, Uncle Mo could be that superstar.”

He sure looked it after winning last year’s Breeders’ Cup Juvenile on the same Churchill Downs track and taking a perfect record into the Wood Memorial. There, Uncle Mo led the field with a quarter-mile to go, but two horses passed him and he finished third by a length. Afterward, Uncle Mo’s appetite fell off and raised suspicions. An exam turned up the stomach problem.

Outwardly, Uncle Mo looks as healthy as, well, a horse. Internally, no one’s sure exactly what’s going on. That’s the quandary.

Uncle Mo could be fine. Or Repole and trainer Todd Pletcher could be risking a repeat of the Wood Memorial.

“From what I’ve seen visually, there’s nothing there that tells me the horse isn’t ready to run,” the trainer of Midnight Interlude said. “He’s a good horse, I’m not believing that crap.”

Pletcher wasn’t talking Thursday. But he’s said Uncle Mo responded well to treatment and his appetite has returned. Repole said he’s gone off much of his medication.

It’s not as easy or obvious a call as last year, when Pletcher’s can’t-miss horse, Eskendereya, dropped out at the start of Derby week with a career-ending leg injury. Or in 2009, when Derby favorite I Want Revenge was scratched on the morning of the race with a bad ankle.

Neither does jockey John Velazquez, who is still searching for his Derby win after 12 tries.

“If he’s right, I don’t think he can be beaten,” Velazquez said. “I’m expecting a big race, nothing else.”

The ultimate decision on Uncle Mo might fall to Velazquez. If the colt doesn’t feel right warming up, Velazquez has the obligation to notify the track veterinarians that Uncle Mo isn’t ready to run 1 1/4 miles.

Of course, it may not come to that if Friday’s decision is no go.

If Uncle Mo doesn’t make the Derby, it’s possible he could turn up in the Preakness on May 21. If not, Repole said he’ll wait until Saratoga in July.

“I want this horse to be the best horse in the country and not just for me, but for racing,” he said.