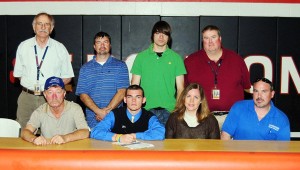 Pierce Reeves has taken care of one problem after signing a letter-of-intent to run track for the Morehead State Golden Eagles.

With his college choice solved, Reeves now must find a way to fill his time.

“I’ll pick up a hobby somewhere or I’ll just run more,” said Reeves who runs 40 miles a week as part of his training.

“All of them offered me a chunk of money,” said Reeves. “I’ve always wanted to run at a Division I school ever since junior high. Morehead was the only Division I to offer and it was a good offer. It is far enough away I don’t have to depend on my mom.”

The two runners are half of the 4×800 meter relay team along with Adam Stumbo and Dustin Moritz to set a school record in the event.

“I like the 4×8 because of the group I’m with,” said Reeves. “I like the 800 because it’s distance and it’s speed. I can run with most guys and I have kick speed.

“I was lucky they took a chance on me. My times are not really Division I, but they’re close enough. They know I can produce once I focus on one sport.”

One thing that keeps Reeves’ motor running his a high-energy personality and a love of the soft drink Mountain Dew. Reeves said he drinks at least two liters a day.

“I have to have it before a race. It’s more of a routine now than anything. But I love my Mountain Dew,” he said.

Reeves said he likes track but admits it’s not his favorite sport.

“All things being equal, I like hockey the best, but Ironton football trumps it all,” said Reeves.

“If it wasn’t for Ironton football, I would pick hockey. Ironton football is different. To be with your teammates and to play in front of the town and have a chance to win a state championship with your friends and classmates is just awesome.”

Pierce is the son of Michelle and Danny Allen of Ironton.