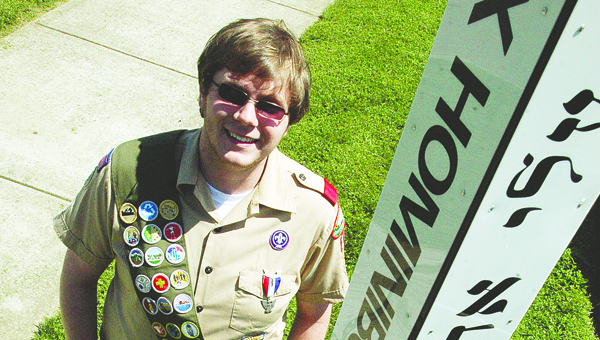 Ironton resident MacLean James, with Boy Scout Troop 109, stands by his Eagle Scout project — a Peace Pole featuring the message “May Peace Prevail on Earth” in eight languages and also in brail. The pole is outside the St. Joseph High School.

It is rooted in one man’s quest to spread peace across the world.

That’s the idea behind the Peace Pole created by Japanese poet and musician Masahisa Goi in Japan.

That mission hit home when MacLean James, a St. Joseph High senior, was looking for a project to win his Eagle Scout rank.

Now standing in the yard of his alma mater is James’ version of the Peace Pole bearing the inscription, “May Peace Prevail on Earth.”

“It is a rectangular wooden pole, 10 feet tall, varnished and I have eight languages on it, in addition to Braille,” James said.

“From planning to actually getting it in the ground, it took probably four or five months,” he said.

And he got help from his family and friends at school.

James has been in scouts since he was 6 and has taken on a variety of leadership roles from assistant patrol leader to senior patrol leader. For the next few months until he goes away to Thomas More College, he will be active as a junior assistant Scout Master for Troop 109.

“You learn leadership in Scouts, definitely leadership,” he said. “And I like being able to learn about all these different things that people who aren’t in Scouts might not be informed about.”

Scouting has even introduced him to every day skills like cooking.

“On campouts I learned to cook my own meals,” James said. “It teaches a lot of basic life skills.”

Right now he’s not sure what career path he will take, although he knows at Thomas More he will be minoring in music. James is an avid musician playing guitar, piano, violin and “a little bit of drums,” he said.

“If it has strings, I like to try to figure it out,” he said.

Although James will stay in Scouts through the summer, he will be saying farewell this fall to his troop.

ASHLAND, Ky. — A woman is being treated for injuries received when she jumped into the Ohio River from Ashland’s... read more