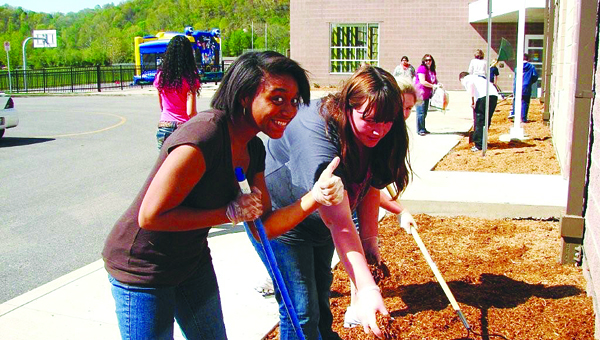 Student Regina Morris gives a thumbs up as she works with students Casey Littlejohn, Savannah Bryant, and more than 50 other Ironton Elementary students who recently stayed after school to pick up litter, sweep sidewalks, and spread mulch around plantings on the school campus on Delaware Street.

One group of Ironton Elementary students were way ahead of those volunteers who met on Saturday, May 7 for Ironton’s official annual Clean-Up Day.

More than 50 sixth, seventh, and eighth graders returned signed permission slips from parents to stay after school on the Thursday before their three-day Easter break to spruce up the area around their new school on Delaware Street.

With tools loaned by Ironton In Bloom, plastic gloves and bags supplied by Lawrence-Scioto County Solid Waste Management, and mulch trucked over for them from the city schools’ storeroom, students fanned out under the direction of Bobbi Payne, elementary guidance counselor, to pick up litter, sweep sidewalks, and spread numerous bags of mulch around the new plantings that are a part of the landscaping done last fall.

Displaying a large bag of litter he had collected, student John Cochran commented, “I had already noticed the garbage around the school, so I signed up. I think we should do this every month!” 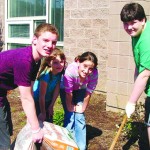 Organizer Bobbi Payne and other staff members worked alongside the students.

“Students should be made aware of their responsibility for the community,” she explained. “So we chose this as a good Earth Day activity.”