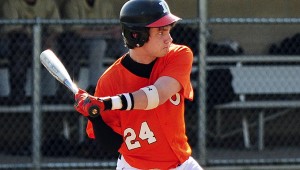 Nursing a bad right shoulder, Jonathan Williams wasn’t sure he’d be able to pitch Wednesday, but he did.

The South Point Pointers probably wished he had stayed on the disabled list.

With nearly two weeks since his last start and needing physical therapy daily, Williams was a questionable starter for Wednesday’s Division III sectional tournament game. But Williams took his turn and pitched a two-hitter and drove in the game’s only run as the Ironton Fighting Tigers blanked the Pointers 1-0.

“We played Portsmouth on Monday and I DH’d (designated hitter) him,” said Ironton coach Tobey Schreck. “He came to me and said, ‘I’ll be able to go.’ He showed a lot of grit.”

Ironton needed Williams’ effort to match the stellar performance of South Point’s Kyle Dickess who gave up five hits and struck out 14 He walked just one.

Williams struck out six and walked three — one intentionally — in going the distance.

Ironton got the game’s only run in the third inning when Tommy Waginger singled with two outs, stole second base and raced home on a double by Williams.

“Waginger and Williams really clutched up for us,” said Schreck.

Waginger also singled and stole second in the first inning but was left stranded. Ironton also threatened in the fifth on singled by Trey Spencer and Steve Easterling with one out, but Dickess got Waginger to fly out and Williams hit into a force play.

South Point’s only real threat came in the fourth when an error and single by Dickess put two on, but Williams enticed the next batter to ground out to second base and end the inning.

Ironton will play at Wheelersburg at 5 p.m. on Friday in the sectional finals.

By JIM WALKER Tribune Sports Editor MINFORD — It was just too many mistakes. The Coal Grove Hornets were guilty... read more