Flyers climb out of early hole to beat Waterford 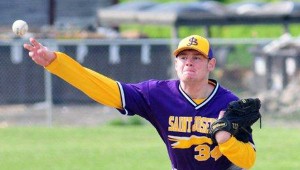 After falling behind 4-0 early, Riley helped fill the hole as he came on to shut down the Waterford bats and allowed the Flyers to rally past the Wildcats 13-5 Thursday in the Division IV sectional tournament.

“We dug ourselves a hole and then Cody (Blackburn) got on and made the pitcher throw from the stretch, he stole a base, forced a balk and that got us going and then we started playing the way we are capable,” said Flyers’ coach Greg Bryant.

“But we can’t keep digging ourselves a hole and try to dig out of it.”

Riley came on and threw the final 5.1 innings to get the win. He struck out 10, walked one and allowed three hits and the only run he allowed was earned.

“Tanner came in and just threw strikes,” said Bryant. “He did a great job of keeping them off-balance.”

The Flyers rallied to tie the bottom of the second.

Joseph Payton singled in a run, Payton Blair was hit by a pitch, Justin Mahlmeister hit into a force play at second to score a run but the relay throw to first base was wild and two more runs scored.

St. Joseph took the lead for good with two runs in the third.

T.J. Young singled, Blackburn was safe on an error and Levi Hopkins put down a sacrifice bunt. Young stole home for the lead and then McGraw squeezed home Blackburn.

The lead went to 8-4 in the fourth inning when Payton walked and Mahlmeister drilled a two-run homer.

The Flyers blew the game open with five runs in the sixth.

With one out, Blair was safe on an error, stole second and scored on a Mahlmeister’s base hit.

Riley went 3-4 while Blair, Young and Mahlmeister all went 2-4 as the Flyers had 11 hits.

Hornets play ‘give away’ in 4-0 tournament loss to Minford

By JIM WALKER Tribune Sports Editor MINFORD — It was just too many mistakes. The Coal Grove Hornets were guilty... read more