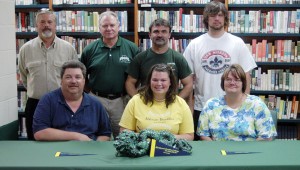 PROCTORVILLE — Sashe Burcham is going to a bigger stage but she’s going to do it in a smaller palace.

The Fairland Lady Dragons’ senior softball standout preferred a smaller college program to the bigger schools, so she decided to make a commitment to attend Alderson-Broaddus College as a member of the Lady Battlers’ softball program.

Burcham entertained offers from other schools and narrowed her choices to A-B, Berea, Ky., and the University of Rio Grande.

A-B College has a student population of about 750. Burcham said the small numbers were part of the reason she was attracted to the NCAA Division II school in Philippi, W.Va.

“I just liked it because it was really small. It’s a little like high school and I like the team there. It’s like a family atmosphere,” said Burcham. “I’m excited. It’ll be an adventure.”

Speaking of family, Sashe’s brother Nathaniel is a sophomore pitcher for Berea. She said they talk often and it is usually about pitching.

“When we were younger we used to play out in the yard and pitch to each other,” Sashe said. “He’d ask me if his curveball was moving and I’d tell him, and then he’d do the same for me. When we talk it’s all about baseball and softball and he’ll ask how I’m doing.”

While Burcham has made a name for herself as a pitcher, she is one of the top hitters in the area and Lady Dragons’ head coach Joe Auxier said she is very versatile.

“We wouldn’t have been anything without Sashe the last two years,” said Auxier. “She is a good hitter and fielder and pitcher. Overall she is a good player, a good student and she has a great attitude.

“Sashe is a good team leader. She can play third base or first base and she can cover the ground. She’s an all-around player.”

Burcham is aware that she won’t be pitching almost every game at the college level and that will mean an adjustment.

“It’s going to be different. I’m used to being out there every day,” said Burcham. “But I think I’ll like it. It will give me a break.”

Sashe — who plans to major in zoology or pre-veterinary medicine — is the daughter of Shawn and Angie Burcham.