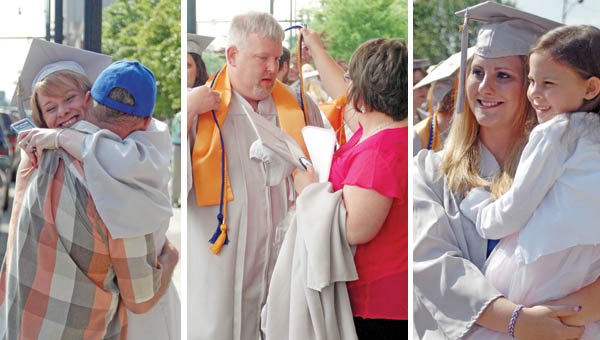 (LEFT) ACTC graduate Tracy Gamble, 40, of Johnson County, gets a hug from fiancé Doug Govle of Martin County. (MIDDLE) Falecia Collier of Worthington helps friend James Gillum of Ashland prepare for graduation. Both are graduates of ACTC. (RIGHT) Maggie Sheldon of Ashland poses her her 5-year-old daughter, Halli, just before her graduation Saturday morning at the Paramount Arts Center.

ASHLAND, Ky. — For Kayla Tolbert and hundreds of others, Saturday morning marked the end of one journey and the beginning of another.

The 29-year-old Ironton resident was one of more than 500 students who graduated from Ashland Community & Technical College. The ceremony was held at the Paramount Arts Center.

“It feels good,” Tolbert said, standing outside the PAC as she awaited the ceremony with fellow graduates. “This is something that I’ve worked for. I started in 2001 and I’m just now getting finished so it’s an amazing feeling.”

The mother of three said she hopes her achievement is something that can inspire her children.

“I wanted them to be here so they could follow in my footsteps maybe,” Tolbert, a graduate of the associates in art and associates in science programs, said.

Tolbert plans to study at Shawnee State University and eventually work as a physical therapist’s assistant.

Justin Chafin of Grayson, Ky., graduated with an associate in arts degree.

“I’m probably going to cry but I’m glad I did it,” Tussey said. “I’ve been here two and a half years and I’m glad I’m done.”

There will be another motion on the table at the upcoming hearing for Megan Goff, who is facing a second... read more