Must we lose you, Abe? 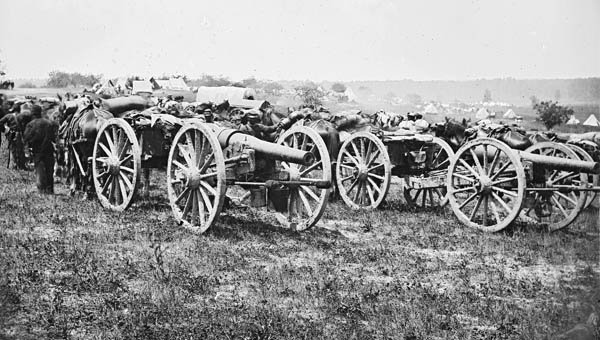 In this photo provided by the Library of Congress, 20-pdr. v Parrott rifled guns of the 1st New York Battery are pictured in Richmond, Va., June 1862, during the Peninsular Campaign of the Civil War.

Chief Sky of the Flambeau band of Chippewas took “Old Abe” and some other eaglets from their nest somewhere between Ashland and Price Counties in northern Wisconsin in 1861.

Chief Sky felt the maple sugar and eaglets would bring some good trading sessions with white farmers along the Flambeau River.

On their second stop, the Indians visited the Dan McCann farm. The Indians persuaded Mrs. McCann to trade a bushel of corn for a baby eaglet. The crippled Mr. McCann liked to play the fiddle and the new pet strutted, flapped his wings, and danced to the fiddle music.

When the McCann children failed to clip the eaglet’s wings, he would fly away. Later that year (1861), Dan McCann travelled to Eau Claire, Wisconsin, and tried to sell the bird to the 8th Wisconsin Infantry.

The soldiers in this unit were treated to the bird’s dancing skills. A Captain Perkins took the bird as the unit’s mascot.

The 8th Wisconsin changed its name from the “Badger Company” to the “Eagle Company.” As the unit marched to join other Wisconsin regiments, people wanted to buy the stately bird. At Camp Randall, the mascot was registered as “Old Abe,” to honor the President.

A wooden standard decorated with stars and stripes served as a perch for “Old Abe,” who wore red, white, and blue ribbons about his neck. Offers of $200 and $500 for “Old Abe” were refused by Captain Perkins.

It was said “Old Abe” inspired the Wisconsin men in battle. He now weighed 10 pounds and his wings spanned 6½ feet from tip to tip.

The eagle would allow no strangers entry to camp without loud screeching. During a battle near Corinth, Mississippi, in 1862, Major General Sterling Price of the Confederacy ordered his men to capture or kill “Old Abe.” The Rebels always failed in both endeavors. “Old Abe” was at the siege of Vicksburg. Many times, the “Wisconsin Eagle” would break away from his perch and circle high in the air over the “Johnnies.”

The bird would dive, climb, and screech and tease the enemy. Many Confederates tried to shoot him, but “Old Abe” would come back to his perch and inspire the Wisconsin regiment. The bird was there for every ambush, skirmish, and battle that the regiment fought—42 of them.

“Old Abe” became even more famous when General Grant saluted him while reviewing the regiment. In Southern towns, “Old Abe” would rear his head back and drink water from a canteen. In 1864, after three hard years of war, the men of the 8th Wisconsin who had not re-enlisted brought “Old Abe” back home with them—to Wisconsin. When the Union vets came to Madison in September 1864, “Old Abe” was given to the State of Wisconsin. “Old Abe” was to live in the basement of the Wisconsin State Capitol Building.

“Old Abe” was taken to patriotic assemblies and veterans’ reunions. Photographs of him were sold for $.10 and his feathers for $5.00 each. P. T. Barnum offered $20,000.00 for him. Old soldiers came back to see their friend. After a soldier’s war whistle, “Old Abe” put his head against the soldier’s cheek. He wanted to be hugged by his soldier friend.

A new state government changed personnel in 1865. Due to neglect, “Old Abe” almost died. An old Wisconsin veteran wrapped “Abe” in a blanket and nursed him for three days. “Old Abe” rallied and returned to good health.

A fire in the Capitol basement on a winter day in 1881 sent flames, smoke, and paint fumes into “Old Abe’s” room. He screeched and was taken outside where he could not breathe well.

“Old Abe’s” remains were put inside a glass enclosure at the Capitol Building until February 27, 1904, when a fire destroyed them. “Old Abe” was truly the “War Eagle of Wisconsin!”

Volunteerism not lost on tourism industry

Last weekend downtown Ironton buzzed with activity as the community young and old pitched in and helped make Ironton a... read more