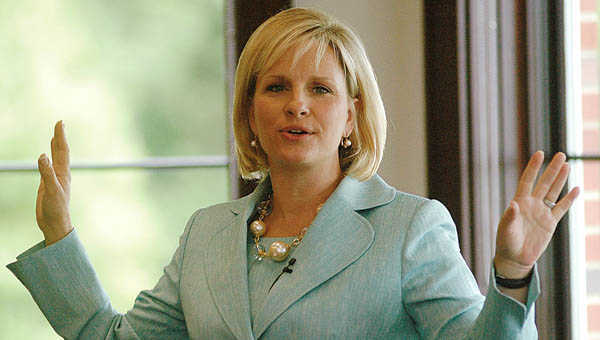 Luncheon speaker Melanie Shafer, an anchor at WSAZ, talks about being in the workforce, a mother of five children and wife during the Women’s Conference Friday at Ohio University Proctorville Center.

PROCTORVILLE — Acknowledgement, support, enrichment and empowerment. Those were the themes of Ohio University Southern’s inaugural women’s conference on Friday.

Women from all parts of Lawrence County and of all ages gathered at the OUS Proctorville Center to talk about everything from fitness and relaxation to self-esteem and financial planning.

“It’s empowering when everyone can come together,” Jessica Williams, a participant, said in-between workshops. “Some of the different sessions were neat because they were about things you don’t address on a daily basis.”

The conference offered eight different workshops with a catered lunch served in between, and a keynote presentation by WSAZ anchor Melanie Shafer.

One of the first workshops, “Work. Life, Balance,” was about one of those topics that women don’t seem to address daily: taking care of yourself.

Dr. Darlene Daneker, an associate professor at Marshal University, who gave the workshop, said, “It is a topic that is very important to us all.”

Participants were encouraged to make a list of all the people they take care of, and how much time they allot to themselves. Daneker encouraged the women to make sure they were able to care for themselves, lest they might experience the short and long-term effects of the stress it can cause the body.

She also discussed with the group reasons why women feel like they need to care for others over themselves and why it is OK to ask for help when feeling overwhelmed.

“Even Superman needed help getting the kryptonite off his neck,” she said. “You’re no better than Superman.”

Another workshop taught women how to relax while taking care of their bodies.

Fox said the moves are meant to make you become “more aware of how the body works and becoming fully aligned.”

Women in the class did beginner level moves while seated, moves that Fox said anyone can do anywhere and anytime, even at work.

Virgin, director of human services technology associate degree program at OUS showed the women how to diffuse a confrontational situation with someone who is being verbally aggressive by using body language and walking away.

Clark, of Phil Clark’s Martial Arts Academy in Ashland, Ky., showed the women “simple but effective techniques that anyone can use” to get away from an attacker.

Everyone in the workshop was able to practice getting away from wrist grasps and headlocks.

Jenna Hannon, 18, said she liked the self-defense workshop. Hannon is a Fairland High School student and was picked to come to the event by Evelyn Capper, one of the conference’s committee members and media specialist at Fairland.

Hannon said the conference encouraged her to take more time for herself and that she felt empowered.

“I think it’s been great,” Capper said of the event. She said the mission of the event, to acknowledge, empower, support and enrich women’s lives, was exactly what the conference accomplished.

As for a second conference next year, Capper said she would absolutely like see that happen.