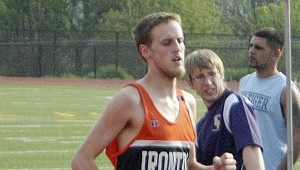 Ironton's Dustin Moritz was a member of the 4x800-meter relay team that won the event during the first day of the Division II district track meet on Tuesday. (The Ironton Tribune / Jimmy Walker)

The first day of the Division II district track and field meet has several local athletes advancing to the regional meet next Thursday and Saturday at Byesville.

The top four finishers in each event qualify for the regional meet.

Finishing second were the Fairland Dragons’ team of Tanner Mattie, Raine Wireman, Ryan Stewart and Jalen Brooks with an 8:46.60 time.

Moritz also qualified in the pole vault as he cleared 10-6 in the rainy weather to finish second. Alex Workman of Chesapeake was fifth at 10-0 and Fairland’s Brandon Nyland (10-0) and Darren Bishop (9-6) placed sixth and seventh, respectively.

South Point’s Tre Campbell leaped 21-0.5 to take second in the long jump behind Tyler Campbell of Gallipolis who jumped 21-3.5 to win the event.

Fairland’s Kenny Smith qualified with a 19-10.5 jump to place fourth. Ironton’s Casey Mace was just one inch behind to finish fifth. Adam Dalton of Rock Hill went 18-6.5 and was seventh.

Ironton’s Ben Wells advanced in the discus with a toss of 136-feet to place second behind David Fouty of Jackson who threw 142-0.

Qualifying for the girls was Chesapeake’s Beth McWhorter who took third in the shot put with a 36-3 heave and Savannah Morris of South Point who threw 33-7 to finish fourth. Samantha Gibson of Fairland threw 28-10.5 to place ninth.

Athens’ Jamie Sindelar was first at 38-7 and Shanice Rollins of Portsmouth threw 36-11 to take second.

Fairland’s Amy Bowman was involved in a three-way tie for second place with Taylor Newman of Portsmouth West and Alex Southworth of Piketon. All three went 4-8 to qualify for the regional meet.

Amanda Ruffner of Chesapeake also went 4-8 but was fifth due to misses. Carly Riley of Fairland was seventh at 4-6.

The second day of the meet will be Friday. The Division III meet is Wednesday and Saturday at Oak Hill.