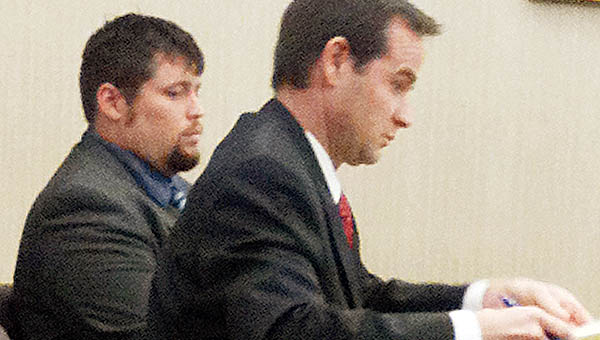 A former police officer accused of pocketing traffic fines has denied charges of tampering with evidence and theft in office.

Trent, along with co-defendant Ronald E. Blanton, was an officer with the Hanging Rock Police Department when the alleged thefts occurred.

Blanton was arraigned and pleaded not guilty to the same charges May 4. Judge Charles Cooper has set a tentative trial date of Aug. 29 for Blanton.

In Trent’s case, Cooper set a $75,000 recognizance bond and scheduled a pretrial hearing for June 1.

Jason P. Newcomb, 28, of 206 B., County Road 22, Ironton, pleaded not guilty to theft. Cooper set a pretrial for June 1 and transferred a bond from a lower court.

Cooper sentenced Baldridge to four years of CCS, which includes the successful completion of the STAR community justice program.

Heidi Roach, 39, of 501 Kemp Ave., Ironton, was sentenced to a total of four years in prison for drug charges. On an earlier date, Roach pleaded guilty to two counts of aggravated drug trafficking and corrupting another with drugs.

Roach apologized to the court.

Steven R. Douglas, 28, of 1017 County Road 52, Ironton, pleaded not guilty to theft by deception from an elderly person and theft of a motor vehicle.

Cooper set a $75,000 recognizance bond and scheduled a pretrial for June 1.

Ronald Turvey, 36, of 305 County Road 103, Ironton, admitted to violating the terms of his community-controlled sanctions. Cooper sentenced Turvey to two years in prison.

That sentence will be concurrent with a sentence imposed by Judge D. Scott Bowling. Turvey pleaded guilty in Bowling’s courtroom to breaking and entering. Bowling sentenced Turvey to 11 months in prison.