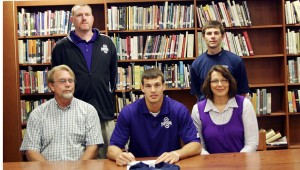 CHESAPEAKE — The Mid-South Conference is known for its physical style of play.

The Chesapeake Panthers 6-foot-6 senior center will get the chance to play the physical style with the Shawnee State University Bears after signing a letter-of-intent with the program.

“I’m not familiar with the league as far as the level of play. But (playing a physical style) doesn’t bother me. I like that,” said Kennedy.

Kennedy chose the Bears over other programs such as Capital, Marietta, Walsh, Ohio Valley University, Notre Dame College, Fairmont State and Kentucky Christian. He was also offered a preferred walk-on from Marshall.

“I’m looking forward to playing at Shawnee. I want to set some goals and get out of it what I want. I plan to work real hard and see what comes out of it. I want to make myself better as a student and an athlete,” said Kennedy.

“Colin and SSU are great fits,” said Shawnee State head coach Jeff Hamilton. “He’s a super young man who has the talent and work ethic to excel at the next level. He immediately gives us additional size and athleticism in the post.”

Kennedy joins recruit Jacob Ison of Elliott County, Ky., to give the Bears two big men who are expected to contribute immediately.

Playing against big men night in and night will be a change from high school, but it is a challenge Kennedy is looking forward to tackling.

“I guess I’ll have to play with it more and get comfortable with it to where I don’t have to worry about it. Playing AAU ball in the past and all-star games in Las Vegas you see guys you don’t normally see in high school and that gets you ready,” said Kennedy.

A four-year starter for the Panthers, Kennedy averaged 12.2 points and 8.0 rebounds per game in a balance offense last season. He shot 82 percent from the foul line as he helped Chesapeake to a 23-2 record, an Ohio Valley Conference championship, a berth in the Division III regional finals and the No. 2 final ranking in the Associated Press poll.

“Colin could have had better numbers, but teams put two players on him and that opened things up for everyone else. He’s a very unselfish player,” said Panthers’ coach Ryan Davis.

As a junior, Kennedy was a key figure as the Panthers earned the school’s first-ever state tournament appearance.

“He comes from a great high school program where coach Davis does a tremendous job preparing high school athletes for the demands of college around a winning and successful environment,” said Hamilton.

“The school is close to home and it seemed a pretty good fit. They had the course of study I wanted,” said Kennedy.

Colin is the son of James and Pamela Kennedy of Chesapeake.