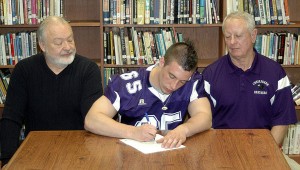 CHESAPEAKE — Cody Mann had a dream as a small boy of playing college football and then later in the NFL.

After signing a letter-of-intent to play for Wittenberg University, Mann is about to realize one dream and his second dream will come true as well. However, his second dream has changed from playing in the NFL to getting an education.

“Ever since I was a young boy I wanted to play college football. I always wanted to go to Ohio State, but then I started to realize what was more important,” said Mann.

“My passion for football gives me a better chance to play at Wittenberg. But the main reason I picked Wittenberg was for the education. I visited and felt real comfortable. I like the campus and they had aeronautical engineering.”

He added another award when he was named to the Ohio High School Football Coaches Association’s Academic All-Ohio team.

Mann stands 5-foot-10 and weighs 195 pounds but can bench press 280 pounds. The two-year starter was a guard and defensive end for the Panthers.

“He’s a super hard worker. He was in the weight room every single day. I don’t think he missed a day,” said Panthers’ head coach Phil Davis.

“In the past year he really blossomed. Size will always be an issue with colleges more than the high school level, but he has the heart and desire and he’s really strong.”

Mann isn’t concerned about his size.

“I’m a perfect fit for linebacker. If I lay inside I blitzed and on the outside I was more of a hard rusher. That’s kind of what their linebackers do, I just have to cover on the pass more. That’s something I’ll have to work on.”

Mann said he’ll use the college workout he gets to help improve his skills before reporting to the fall camp.

“I’ll work on my speed and I have the whole summer to get strong,” said Mann.

Cody is the son of Mike and Donna Mann of Chesapeake.

Friends continue to lead by example

By the end of the day today the scores will be tallied, the baskets will all have been shot and... read more