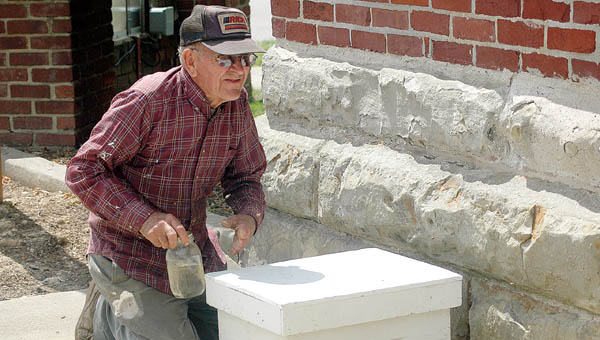 Ironton resident Larry Freeman tends to a swarm of bees outside the St. Lawrence O’Toole Church Friday. The swarm was noticed by passersby and Larry was contacted to take care of the problem. 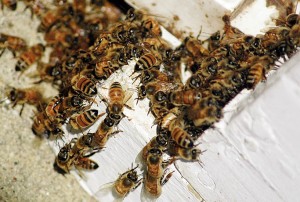 Bees swarm around a hive box outside the St. Lawrence O’Toole Church Friday in Ironton.

St. Lawrence O’Toole Catholic Church was buzzing with excitement Friday afternoon when the church’s resident queen bee decided she was ready for a new home.

Having no place to go, the bees swarmed on the outside wall of the church.

Larry Freeman got the call while he was working in his garden on North Second Street. A beekeeper veteran of 42 years, Freeman knew just how to handle the delicate situation.

“They were just clinging to the wall,” Freeman said of the sight. “They were about eight inches up from the ground and they were just plastered over the area about three inches thick.”

Surveying the situation, Freeman deduced that some time that morning, the queen left the hive through a hole in the stone wall of the church, below a high window on the Center Street side, taking her worker bees with her.

“If there are too many bees in a hive, they will raise a new queen,” he said. “Then the old queen will leave and take part of the bees with her. And the new queen will take over the hive.”

Equipped with the proper tools, an empty hive, a jar of sugar water, a beekeepers hat and a broom, Freeman gently swept the bees off the wall and into the hive. Once the queen was in, her worker drones follow suit.

Freeman estimated that about 25,000 bees were swarming on the church, sending out scouts to look for a new home. He said it could take them anywhere from 10 minutes to a week to find a new hive. Once all the bees settled into the hive, Freeman would be able to take them back to his home to be placed amongst his other hives.

“I’d rather see them be taken where they can do what they are supposed to do rather than be killed,” said Hall. Hall said he has had to call Freeman a couple of other times when the church’s hive has swarmed outside.

Father David Huffman said bees have been in the wall of the church for at least 80 years and remembers the late Father James Dirker talking about the bees being there when he was just a child.

“Last year I was trying to get rid of him,” Huffman said. His attempt failed so he decided to leave them alone since the hive is so high up the wall.

“I wouldn’t worry about them,” Freeman said. “They’ve been there for years and the honey isn’t leaking inside or anything. They don’t hurt anything and they’re so high.”

Hall said he would keep an eye on the hive until Freeman was ready to transport it Friday night.

Hall laughed, “I told him, ‘I don’t think there’s much danger of someone stealing a box full of bees.’”