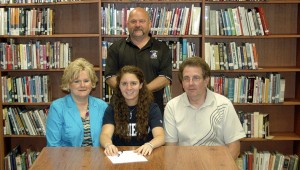 CHESAPEAKE — Sarah Mayo thinks there is a real science to playing softball.

The science isn’t so much in the actual game but in getting a chance to play at the college level after the Chesapeake Lady Panthers’ senior infielder signed a letter of intent to play for the Marietta College Pioneers on Tuesday.

Mayo entertained offers to play at other NCAA Division I and II programs but decided on the NCAA Division III Pioneers because of their science program.

“I didn’t apply anywhere that didn’t have an engineering program. It didn’t matter if they had a softball program or not,” said Mayo who plans to major in petroleum engineering.

“That’s what I’m going to do the rest of my life, not play softball. I wouldn’t mind being around the game later. I’d like to coach.”

A four-year starter for the Lady Panthers, Mayo was a three-time All-Ohio Valley Conference selection. She was second team on the coaches’ all-district team as a sophomore and first team the past two years. She was selected second team All-Ohio this year.

“Sarah is one of those players who are hard to replace,” said Chesapeake coach Aaron Rice. “She started as a freshman and that’s hard to do. She had a great work ethic as a player and a student.

“We had a young team this year and her leadership with the younger kids who were so inexperienced was great. She’s one of the best players we’ve had come through him.”

While Mayo has always had a love for softball, she has also had a love for science. She qualified for the state science fair six straight years, a rare accomplishment that earned her a special plaque and the Infoscitex Corporation Foundation $5,000 scholarship.

In the 20 science fairs she entered, Mayo earned 18 superior ratings and two excellents.

She competed with 400 other students for six special Marietta scholarships. One was for a full ride and the other five were trustee scholarships that paid full tuition. Mayo was one of the five trustee winners.

Mayo said the academic scholarship allows her the opportunity to play softball.

“I’ll play where ever (coach Jeanne Arbuckle) wants me to play. I’ll be more of a utility player, probably more at third base,” said Mayo.

“Marietta seemed a better fit. The moment I got out of the car and stepped on the campus I knew it was the place for me. It seemed like home away from home.”

Besides softball, Mayo was a four-year starter for the Lady Panthers’ basketball team. She averaged 13.7 points a game and was a three-time All-Ohio Valley Conference first team selection and two-time all-district pick.

“I like basketball but I love softball,” said Mayo. “My freshman year and early in my sophomore year I thought I’d end up playing basketball, but from the middle of my sophomore year on I realized being on the field was so much better I couldn’t see myself anywhere else.”

Sarah is the daughter of Brent and Julie Mayo of Chesapeake.