Redwomen use HRs to edge Westfall 7-6 in regionals 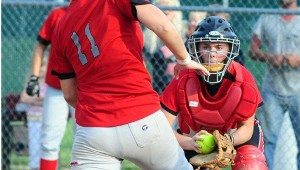 Rock Hill catcher Brooke Eastham waits to put the tag on a Westfall runner attempting to score. The runner was out and the Redwomen went on to beat Westfall 7-6 in eight innings Wednesday in the regional semifinals. (The Ironton Tribune / Kent Sanborn of Southern Ohio Sports Photos.com)

LANCASTER — Hockey isn’t the only sport with a power play.

The Rock Hill Redwomen did their own version of the power play as they slugged two home runs and two doubles in a 7-6 eight-inning win over the Westfall Lady Mustangs on Wednesday in the Division III regional semifinals.

“It was exciting. I thought for a while it was going to be a slugfest the way everyone was hitting to start the game,” said Rock Hill coach Mary Jane Harper.

“The girls didn’t waver. The just kept coming. But they make me nervous.”

Rock Hill (20-2) will play at noon on Saturday in the regional finals against the winner of Thursday’s game between Lucasville Valley and Liberty Union.

The win gives Rock Hill its first-ever berth in a regional championship game regardless of the sport.

Rock Hill took a quick 1-0 lead on a home run by Morgan Damron to start the game — the first round-tripper of her career.

They added another run in the inning when BreeAnna Depriest singled and then and Brooke Hanshaw, Morgan Schug and Lindy Simpson all walked to force in a run.

Westfall’s Gina Rosshirt and Brittney Armentrout hit solo home runs in the bottom of the inning to tie the game.

The Redwomen came right back to go up 4-2 on a home run by Chelsea Harper following a walk to Depriest.

Westfall (19-7) scored three runs in the bottom of the third inning to take a 5-4 lead.

But Rock Hill regained the lead with a pair of runs in the fourth to make it 6-5.

Depriest singled, stole second base, Harper was safe on an error and Brooke Hanshaw grounded out as a run scored. Harper came home on a two-out dropped pop fly.

The Lady Mustangs tied the game with a run in the bottom of the sixth on a solo home run by Olivia Cobb.

Hanshaw singled and Schug reached on an error to start the inning. Crabtree then singled to left-center as Hanshaw scored the go-ahead run.

In the bottom of the inning pitcher Sami Nixon retired Westfall in order to secure the win.