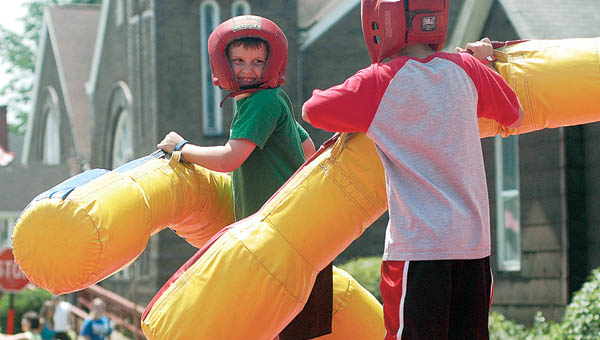 Eight-year-old Jacob Holtzapfel squares off against his cousin Chase Willis, 9, in a jousting competition at the Ironton Catholic Schools Charity Fair.

The event, which is at least in its 25th year, kicked off Friday evening and will continue through Monday. The fair benefits the Ironton Catholic Schools.

“We have a good crowd and sunshine, which is always a good thing,” Charity Fair co-chair Sissy Clyse said.

The high school variety show band Senior Discounts and Irish Town performed Saturday night. Today from 2 – 6 p.m. there will be a spaghetti dinner. Tonight at 7 p.m. the band City Heat will perform.

Ironton Catholic Schools is celebrating the 25th documented year of the event, though Clyse said that there were probably similar events before it was documented. The goal for this year’s fair is to raise $30,000.

“For us it’s crucial to do well at Charity Fair,” Clyse said. “Otherwise we would have to come up with a different way to make the money. We want to keep tuition low for our students and families. That’s why we have the Charity Fair.”

Help for the Charity Fair comes by way of parents and community members.

“We have very committed community volunteers,” she said.

Linda McGraw of Ironton, a mother of two students, volunteered her time at the fair. She said the Charity Fair is important because the schools are important to so many families, including her own. All her family members have gone to the schools, she said.

“We’ve had a good crowd this year with the weather,” Blair said. “We’re blessed with no rain.”

By JIM WALKER Tribune Sports Editor BYESVILLE — It was what you would expect at a regional track meet. Outstanding... read more