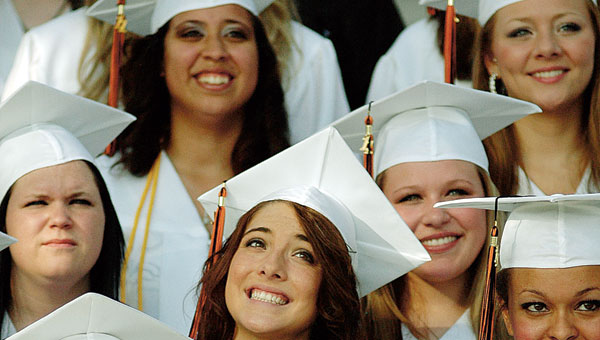 Students from the class of 2011 beam with pride as they get their class photo taken on the steps of Ironton High School before the start of graduation exercises Sunday evening.

IRONTON — The early evening sun glared so fiercely off the parking lot pavement at Ironton High School that many graduates took to hiding behind their shades.

Megan Dalton was no exception, showing comfort was foremost in her mind by wearing mirrored aviator sunglasses and soft brown moccasins.

Flat shoes came in handy for the senior at Sunday’s graduation as she had to balance a variety of stoles, cords and a chunky medal for a 4.0 grade point average that showed her four years as IHS was marked with success.

Waking up Sunday morning, she admitted it took her a minute to realize this was her graduation day.

“Surprisingly, I didn’t feel any different,” she said. “I woke up and thought it was time to go to church. Then I remembered I was graduating and it was kind of a surreal experience.”

Next on her agenda is Ohio University at Athens where she plans to pursue a double major in pre-medicine and psychology. Her long-term goal is first to become a physician, then a psychiatrist.

Her short-term goal was more practical.

“I’m not taking these sun glasses off unless they tell me to,” she said.

A steady stream of seniors headed for Tanks Memorial Stadium for photos before the school band struck up the processional.

Some gave quick critiques of their friends’ one-time-only attire.

“Your tassel looks like a tail in the back,” one girl chided.

By their car, Becky and Grady Runyon helped their only child, Sarah, adjust her gown before she was off to join her classmates.

Sarah sported the blue sash for honor society, a yellow for her grade point average and a third for the German honorary society.

In the fall she plans to start at Ohio University Southern majoring in business with a minor in computers.

“I want to own a small business and want to do something with computers,” she said.

As to the event at hand?

“I’m queasy and really excited,” Sarah said. “I’ve waited for it for so long. I never thought it would happen.”

However her mother conceded she had mixed emotions.

“She is really independent. I’m ready for her to move but …,” she said as her voice broke. “I wasn’t going to cry.”