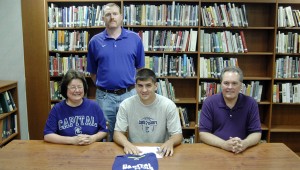 CHESAPEAKE — Nathan Copley’s basketball career is about to make a big change on the surface, but the Chesapeake Panthers’ 6-foot-2 senior guard isn’t so sure it’ll be that big of a difference.

Copley signed a letter-of-intent to play for the Capital Crusaders on Thursday. Like Chesapeake, the Crusaders are purple and white. Like the Panthers, Capital has a winning tradition.

And like Panthers’ head coach Ryan Davis, Capital has a demanding coach in Damon Goodwin.

“They are both hard-nosed, disciplined and expect a lot out of you. They expect you to work hard every time you’re in the gym,” said Copley. “Both are pretty intense, too. I don’t really know another style to play, so that’s how I see myself fitting in.”

Davis knows Copley will succeed at the next level, he’s just trying to figure out how to keep winning without his star guard.

“I’ve never coached a game at Chesapeake without Nathan Copley. It’ll be different not having him here,” said Davis.”

“Everyone knows Nathan can shoot the ball from anywhere on the court, but Nathan was very unselfish, he understood the game and he was a great leader. He’ll be hard to replace in more ways than just the numbers he put up.”

Copley is looking forward to playing at the college level, but he said his heart and love for Chesapeake basketball will remain at home.

“There’s people I’ve met just playing basketball and that’s the reason I don’t want to leave. Everybody here, it’s a close family,” said Copley. “Hopefully I’ll end up back here one day, being able to help out coach Davis or do something to keep this program going.”

In typical fashion, Copley said he doesn’t care if he plays the shooting or point guard at Capital.

“I don’t expect to go up there and start. I have to earn everything I get, but I see myself getting minutes here or there, being the seventh or eighth guy at the least.”

Copley was a four-year starter who earned first team All-Ohio Valley Conference three times and was named to the Associated Press all-district team three times as well, twice on the first team. He was All-Ohio third team last season.

He was a three-time Southeast District Coaches Association all-district member including the Player of the Year this past season as he earned a spot on the North/South All-Star Game roster.

He averaged 14.5 points, 4.6 assists and 7.4 rebounds as he switched from the shooting guard to point guard. He shot almost 70 percent from 2-point range, second best in the state.

Davis said Copley could have scored more but his role didn’t call for him to score.

“I told Nathan last summer his role was going to change and he just said, ‘I knew that. I’ll do whatever you need for us to win.’ That’s the kind of player he is,” said Davis.

Copley said reaching the state tournament was an amazing experience.

“It’s unlike anything I feel like you can experience anywhere else. It’s a dream place to play,” said Copley.

Nathan — who carries a 4.0 grade point average — plans to major in accounting.

He is the son of Benny and Teresa Copley of Chesapeake.