Ro-Na event to be held Monday 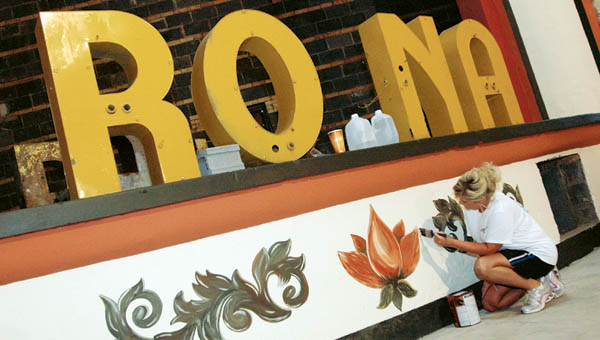 Lori Heaberlin works on some decorative painting on the stage area of the Ro-Na Theatre Thursday.

With its concrete floors, walls that have been stripped of their plaster and railings that are rotting and falling apart, the Ro-Na theatre is not much to look at right now.

But a group of community volunteers see more than a run-down old building when they look at the historic theatre: They see potential.

“We want this to be an activity/entertainment center, a place where the entire community can come in and utilize this place,” Katrina Keith, a member of the Ro-Na restoration steering committee, said. “We want to be able to hold conferences. We want to bring people into Ironton and they can spend their money right here.”

Several community organizations and volunteers are pitching in to see that one day that happens.

On Monday, the public can get a look at just how much work has been done to the inside of the theatre. An open house building tour of the theatre will be held from 9 a.m. to 3 p.m.

“One of the main goals (of the showcase) is to get people in here to see how much progress has been done so far,” Jessica Williams, a member of the steering committee, said.

“I know a lot of people in town, when they were first in here the roof was collapsing and you were stepping over (debris)… A lot of stuff has been done on the inside and they haven’t been able to see it from the outside.”

Work on the old theatre began in 2009 when the steering committee was established. The first phase of the project was completed when the roof was replaced.

The next phase of the project will be to secure the building with new windows and doors.

The Ironton-Lawrence County Community Action Organization has received a community development block grant that will provide about $50,000 to replace and upgrade doors and windows in the building, CAO assistant director Ralph Kline said.

With the help of a $20,000 loan from the CAO and the Ironton Port Authority, the Friends of Ironton is planning to construct a green room in the theatre. The room, which will likely be the first useable room in the building, will be used for headquarters during events like Gus Macker and Rally on the River.

Kline said the CAO is looking at various sources of funding for the renovations.

“(This is a) multi-phased project,” Kline said. “I think we’re looking at various stages. (First) preserving it, then limited uses and putting it together piece by piece.”

It’s not just the organizations that are putting in effort for the Ro-Na; several volunteers from the community have also given of their time.

“These are just local volunteers,” Keith said. “People who see this and say you know what, we’ve got to do something to restore this.”

Volunteers from the group home, members of the Ironton City Council and the mayor and many others have volunteered in the Ro-Na, Keith said.

“It’s not just the Friends of Ironton, people all over the place are volunteering,” she said.

Williams added that the Eagles club sponsored a fundraiser for the project. Businesses, too, have donated time and materials to the renovation.

Monday’s event will feature conceptual drawings of what the theatre could look like when it’s finished. There will be popcorn, balloons for children and a red carpet rolled out outside the theatre. The theatre’s original marquee letters will be on display for anyone who wants to have their pictures taken with them.

Eventgoers will also have the opportunity to sign cards pledging their time or donations to the project.

“We don’t want people to think, ‘I don’t have anything to give to this,’” Keith said. She encouraged individuals as well as clubs and organizations to get involved in the project. “Some people may not have money, but they could give their time.”

Eight-year-old Jacob Holtzapfel squares off against his cousin Chase Willis, 9, in a jousting competition at the Ironton Catholic Schools... read more