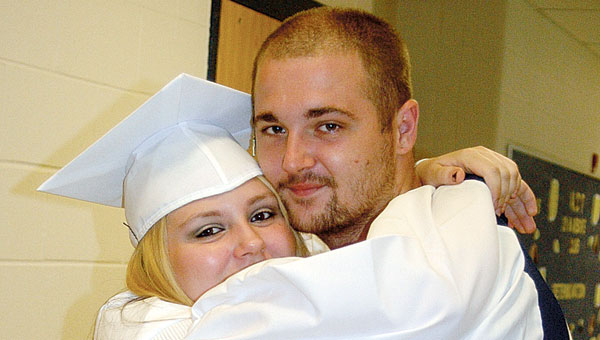 SOUTH POINT — It was a speech Mary Swartzwelder had heard before. But repetition wasn’t going to dull her excitement as her daughter, Rebekah, took center stage as a co-valedictorian at South Point High School.

“We are very proud of her,” Swartzwelder said before taking her place in the audience section of the high school gym Sunday afternoon.

“She has accomplished her goals,” Swartzwelder said. “And she is going to challenge the kids to look forward.”

As Rebekah made a last-minute adjustment to her gown and stoles, her classmates spent the half-hour before showtime gossiping, taking snapshots and texting.

Sarah Wheeler knew what she was going to do with her life after the ceremony.

She just wasn’t sure about her 15 seconds of upcoming fame when she was to go on stage to get her diploma.

“I’m nervous about tripping on the steps in these heels,” she said.

There were 112 seniors who crossed the stage to get their diplomas with Swartzwelder joining Robert Brown as co-valedictorian. Brooke Lucas was this year’s salutatorian. Those three also received their diplomas with honors. Brown, Wheeler, Kaleb Cihon and Leeann Stover were merit award winners.

The afternoon held a mixture of excitement and sadness for Alex Cass, who plans to enter Morehead State University in the fall.

“I know I will not be coming back here,” he said. “But with the social networks, I will keep in touch with my friends.”

A love of technology is what inspired Alex on his college and career choices. At MSU he will be taking the Kentucky college’s inaugural video game programming curriculum.

“I would love to work for Nintendo,” he said. “If all goes as planned and God’s will be done.”