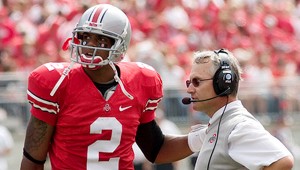 Jim Tressel, right, resigned Monday as the Ohio State Buckeyes head coach in part to NCAA violations linked to many players including starting quarterback Terrellee Pryor, left, who is under his own investigation. (The Ironton Tribune / MCT Direct Photo)

COLUMBUS — At the bottom of the stunning resignation letter that he carefully typed in his office on Monday morning, in the last lines above his characteristically neat and clear signature, Ohio State coach Jim Tressel closed with a personal note.

“We know that God has a plan for us and we will be fine,” he wrote, referring to himself and his wife, Ellen.

“We will be Buckeyes forever.”

But no longer will he be the Buckeyes coach.

Tressel, who guided Ohio State to its first national title in 34 years, resigned Monday amid NCAA violations from a tattoo-parlor scandal that sullied the image of one of the country’s top football programs.

He said the ongoing investigations and drumbeat of almost daily, sordid revelations were a “distraction” to the university and that he was stepping down “for the greater good of our school.”

Tressel is still scheduled to go before the NCAA’s committee on infractions in August for lying to the NCAA and then covering it up — the most egregious of sins for a coach in the eyes of college sports’ ruling body. The former coach will join school officials at that meeting.

But Ohio State is not required to pay any buyout or severance to Tressel, who made around $3.5 million a year.

Ohio State announced that assistant coach Luke Fickell, already tabbed to take over for Tressel during his self-imposed five-game suspension for his violations, will be the Buckeyes coach for the 2011 season. Ohio State will begin looking for a permanent coach who will take over next year.

It was a startling fall for a coach who won championships and sidestepped several major NCAA violations through the years. They dated to his days as the ultrasuccessful coach at Youngstown State, where he won four Division I-AA national titles, through a decade as Ohio State’s coach, where he posted a 106-22 record.

The abrupt resignation, first reported by The Columbus Dispatch, capped six months of turmoil in the program.

In December, five Ohio State players — including star quarterback Terrelle Pryor — were found to have received cash and discounted tattoos from the owner of a local tattoo parlor who was the subject of a federal drug-trafficking case. All were permitted by the NCAA to play in the Buckeyes’ 31-26 victory over Arkansas in the Sugar Bowl, with their suspensions to begin with the first game of the 2011 season.

After the team returned from New Orleans, Ohio State officials began preparing an appeal of the players’ sanctions. It was then that investigators found that Tressel had learned in April 2010 about the players’ involvement with the parlor owner, Edward Rife.

Tressel had signed an NCAA compliance form in September saying he had no knowledge of any wrongdoing by athletes. His contract, in addition to NCAA rules, specified that he had to tell his superiors or compliance department about any potential NCAA rules violations. Yet he did not tell anyone, except to forward emails to Ted Sarniak, reportedly a “mentor” for Pryor back in his hometown of Jeannette, Pa.

Also on Monday, The Columbus Dispatch reported that Pryor is the subject of a “significant” inquiry by the NCAA and Ohio State regarding cars and other improper benefits he may have received.

Later Monday, Sports Illustrated reported that the memorabilia-for-tattoos violations actually stretched back to 2002, Tressel’s second season at Ohio State, and involved at least 28 players — 22 more than the university has acknowledged. Those numbers include, beyond the six suspended players, an additional nine current players as well as other former players whose alleged wrongdoing might fall within the NCAA’s four-year statute of limitations on violations.

“During the course of an investigation, the university and the NCAA work jointly to review any new allegations that come to light, and will continue to do so until the conclusion of the investigation,” he said. “You should rest assured that these new allegations will be evaluated in exactly this manner. Beyond that, we will have no further comment.”

Ohio State called a hurried news conference on March 8, during which it handed Tressel a two-game suspension (later raised to five games), fined him $250,000, and required him to publicly apologize and attend an NCAA compliance seminar.

Smith and Ohio State President Gordon Gee, though, heaped praise on Tressel and said they were behind him 100 percent. Gee even joked when asked if he had considered firing the coach: “No, are you kidding? Let me just be very clear: I’m just hopeful the coach doesn’t dismiss me.”

Gee was not joking about the Tressel situation over the weekend. Ohio State released a letter from Gee to the university’s board of trustees which said, “As you all know, I appointed a special committee to analyze and provide advice to me regarding issues attendant to our football program. In consultation with the senior leadership of the university and the senior leadership of the board, I have been actively reviewing the matter and have accepted coach Tressel’s resignation.”

Tressel’s downfall came with public and media pressure mounting on Ohio State, its board of trustees, Gee and Smith.

Smith said in a video statement Monday, “As you all know, we are under NCAA investigation. We will not discuss any of the matters around that case or any further accusations that may emerge. We will do what we always do. We respond to them, we collaborate with the NCAA and try and find the truth.”

Ohio State will go before the NCAA’s infractions committee Aug. 12.

As for Tressel, he was in trouble with the NCAA, even before coming to Ohio State. In fact, he was the coach at Youngstown State when it received scholarship and recruiting restrictions for violations involving star quarterback Ray Isaac.

Yet before that investigation had played itself out, Tressel was hired in 2001 at Ohio State.

Introduced at an Ohio State basketball game in 2001, Tressel vowed that fans would “be proud of our young people, in the classroom, in the community, and most especially in 310 days in Ann Arbor, Mich., on the football field.”

His first team went just 7-5, but the unranked Buckeyes shocked No. 11 Michigan 26-20. Tressel would go 9-1 against Ohio State’s archrival and 6-4 in bowl games.

In 2002, with a team led by freshman tailback Maurice Clarett, the Buckeyes won everything. They went 14-0, winning seven games by seven or fewer points. Ranked No. 2, they took on top-ranked Miami in the Fiesta Bowl for the Bowl Championship Series national title. In the second overtime, Clarett bulled over the middle for a touchdown and the Buckeyes held to clinch their first national title since 1968. After the game, Tressel held aloft the crystal football.

The following summer, Clarett reported that a used car he had borrowed from a local dealer was broken into and that he had lost thousands of dollars in the theft. Clarett’s call to police came from Tressel’s office. Clarett admitted he had made up the break-in call and later took a plea deal. But the NCAA began looking into Clarett and the team. Soon after, he was declared ineligible. He would never play another college game.

There had been a stream of players getting in trouble at Ohio State, but in December 2004 backup quarterback Troy Smith was suspended for the bowl game and the 2005 regular-season opener for accepting $500 from a booster. Smith would go on to win the 2006 Heisman Trophy, leading the Buckeyes to a 12-0 record and a seasonlong No. 1 ranking. Despite being a heavy favorite in the national title game, the Buckeyes were routed by Florida 41-14.

They also were beaten badly in the national championship game the following year, 38-24, by LSU.

Tressel’s latest brush with NCAA violations was just too much — for him, for the university, for a program that prides itself on being somehow cleaner and better than others.

The author of two books about faith and integrity, he remains a scapegoat to many and a hypocrite to others. Even though he has many backers, a rising chorus of detractors had stepped forward during the ongoing NCAA investigation. There were also questions about his players and their friends and family members receiving special deals on more than 50 used cars from two Columbus dealers.

But at the same time, his image was that of an honest, religious man who never said or did anything without thinking it through first. His nickname was “The Senator” for never having a hair out of place, praising opponents and seldom giving a clear answer to even the simplest of questions.

The Associated Press COLUMBUS — On the same day coach Jim Tressel resigned in the wake of an NCAA investigation,... read more