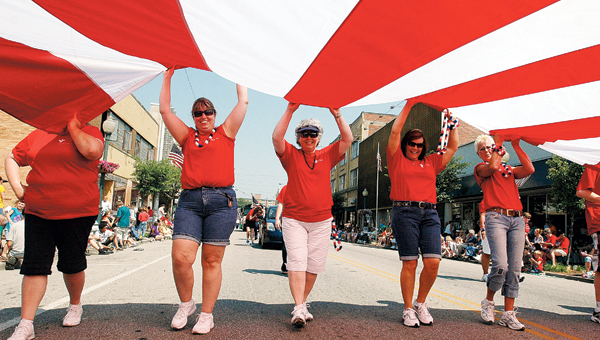 Representatives with Our Lady of Bellefonte Hospital walk the parade route as they participate in the annual Ironton-Lawrence County Memorial Day Parade. THE TRIBUNE/JESSICA ST JAMES

The out-of-town guest was impressed. Dewayne Grasty had come all the way from Gulfport, Miss., to celebrate Memorial Day with Ironton.

And part of that invitation was to play a role in the American Legion Post 433 float in the 143rd Ironton-Lawrence County Memorial Day Parade. This year’s theme was “Saluting Our Defenders of Freedom.”

“This is amazing,” Grasty said as he waited Monday morning on Railroad Street to take his place on the float designed by the post known for its Patriot Guard funeral escorts.

As a lieutenant commander in the Navy Seals, Grasty lost both his legs in combat. The float featured Grasty seated in his wheelchair across from a makeshift coffin, representing the breadth of sacrifice those in the military make for freedom.

“Some make it and some don’t,” according to one of the members of the post. “(Grasty) represents the people who did make it and who live with their choices. And we salute them.”

This year’s judges were Rosa and Bill Britt.

“There is a lot of work that goes into this,” Rosa said.

By 7 a.m. Monday post members were almost ready to roll in this year’s parade as they watched Adam Risner of the 1191st Engineer’s Group place an American flag atop the display.

This was the fourth year for Tri-State Baptist Temple to enter a float and take honors from the judges. This year the South Point church’s entry earned Third Division Parade Commander Float.

“We were really excited to do this,” Tim Jenkins, pastor of the church, said. The float displayed on mannequins actual armed services uniforms donated by members of the congregation. Uniforms came from World War II, the Vietnam War and the War on Terrorism in Iraq. Riding on the float was Gary Letterman, a Marine Corps staff sergeant, whose sons, Grant and Garrett Letterman, attend Tri-State Baptist.

Young people were the featured players in two award winners. Campbell Chapel took the prize for Eighth Division Youth Float, where the names of members of the church’s family who had served were displayed.

“We looked at the theme of the parade first and what we wanted to do with it,” Shannon McCarty, youth director at Campbell Chapel, said. “People in our church who had served or the family of church members.”

Displayed across the front of the float were the words “Greater Love Hath No Man Than He Lay Down His Life For A Friend.” “It is the price people have paid for our freedom,” McCarty said. “And how Jesus has paid the price for our sins so we can be free.”

The youth group of Zoar Baptist Church was front and center on that float that won Tenth Division Civic Float. They were given a special assignment for this year’s parade.

“The kids are old enough to tell people about Jesus,” Ed Gullett, a church member, said. “They will be passing out tracts.”

Also receiving the Third Division Past Grand Marshal honors was the A&L Home Care whose participants passed out a variety of patriotic items.

Causes near to the hearts of their designers were the themes of other floats from a sense of pride in the past with the Lawrence County Historical Society’s entry that offered a circa 1840s Conestoga Wagon to honoring military chaplains on the First Baptist Church of Proctorville float to the fight to eradicate childhood cancer on Josie’s Journey float.

Josie’s Journey was created by the family of the soon-to-be 6-year-old from Coal Grove who suffers from rhabdomyosarcoma. Josie Butcher was diagnosed on Sept. 28, 2010, and has been undergoing treatment.

“This was a labor of love,” Brittany Butcher, Josie’s mother, said.

The float displayed photos of survivors and victims of childhood cancers from “Valerie – Forever 19” to “Mailyn, 5, Leukemia.”

“We are trying to get the word out about childhood cancer awareness,” Butcher said.

The parade started promptly at 10 a.m. at the Fourth and Center street corners of the courthouse with prayer and the playing of the National Anthem by the Ironton High School Million Dollar Marching Band.

Then with a 21-gun salute by the honor guard of the VFW Post 8850 and the playing of “Taps,” the parade was off, marching down Center to Third Street to the cheers of the crowd two and three deep curbside.

Many in the crowd had shown up on the city streets as early as 7 a.m. like Pat Browning whose favorite spot is near the corner of Vernon and Sixth streets.

“You come early to get your favorite spot,” Browning said. “Your family knows this is where you will be.”

Armed with blankets, chairs, a book to fill the hours before parade time and a fast food sandwich, Browning was prepared.

“We are honoring our veterans and the people who are serving our country,” she said. “We need to teach our children about this.”