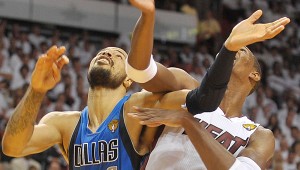 Tyson Chandler, left, of the Dallas Mavericks and Chris Bosh of the Miami Heat battle for space underneath the basket in the second quarter during Game 1 of the NBA Finals on Tuesday at the American Airlines Arena. The Heat won 92-84. (The Ironton Tribune / MCT Direct Photo)

MIAMI (AP) — Dwyane Wade’s night began with a hug for his mom. It ended with an embrace from LeBron James.

And the Miami Heat have struck first in the NBA finals.

James scored 24 points for his first win in five finals-game appearances, Wade added 22 points and 10 rebounds and the Heat beat the Dallas Mavericks 92-84 in Game 1 of the title series on Tuesday night.

The Heat trailed by eight points early in the third quarter before pulling away, remaining unbeaten at home in these playoffs and snapping Dallas’ five-game road winning streak.

Chris Bosh scored 19 points — holding up three fingers when it was over, a clear nod to the three wins Miami needs for a title — and Mario Chalmers added 12 for the Heat, who host Game 2 on Thursday night.

Wade’s 3-pointer with 3:06 left put the Heat up 82-73, then the largest lead of the game for either team. The Mavs shaved two points off it on the next possession when Nowitzki hit two free throws, but James gave the Heat their first double-digit lead of the finals a few seconds later.

He dribbled upcourt against Shawn Marion, crossed his dribble over and got clear for a dunk while being fouled. The free throw made it 85-75, and most in the sellout, white-clad crowd began standing in anticipation.

Wade grabbed a key defensive rebound, dribbled away from three Dallas pursuers and found Bosh for a dunk with 1:08 left that restored the 10-point lead.

Another dunk by James came with 38.6 seconds left, sealing it.

Game over, and the Heat fans knew it, breaking into their now-traditional tossing of their white seat covers.

“I just was aggressive,” Wade said. “We understand that this is the kind of game we wanted to play. We had them where we wanted them in the sense of points. You know they wasn’t scoring a lot on us and offensively we just executed and guys made plays.”

Dirk Nowitzki scored 27 points and grabbed eight rebounds for Dallas, which got 16 from Marion and 12 from Jason Terry. It was Dallas’ fifth straight loss to Miami in finals games, dating to the Heat rally for the 2006 crown.

Dallas had 51 points after 26 minutes. The Mavericks scored 18 points in the next 18 minutes, 33 over the remainder of the game, as Miami’s defense found another gear.

“That’s kind of the way we’ve been winning games, of late,” Wade said. “You’ve got stay with it. You can’t get frustrated because the ball’s not going in. There’s other ways you can dominate the game and we was able to do that tonight. I thought we did a great job in the second half of rebounding the ball, limiting them to one shot as much as possible.”

So, like was the case so many times this season, the Heat took the difficult route.

Miami coach Eric Spoelstra misspoke before the game, saying it had been “425 days” since the Heat opened training camp. He meant 245, but some would say this season may have seemed 180 days longer after all that’s happened along the way.

There was James’ “The Decision” where he left Cleveland for Miami, of course, something that still has him considered to be a villain in plenty of NBA cities. There was the 9-8 start, capped by a loss and long players-only meeting in Dallas. The Heat were swept by Chicago in the regular season, lost three of four to Boston, then fittingly vanquished both in the Eastern Conference playoffs.

The Mavs have an uncanny run of dominance over the Heat — which, for whatever reason, only seems to apply in regular-season games.

Take away the 2006 NBA finals, and Dallas came into Game 1 having beaten Miami 14 straight times. The only team that has lost to any team more times consecutively is Minnesota, which finished with the NBA’s worst record this season. The Timberwolves have lost 16 straight to San Antonio and Portland, and 15 straight to the Los Angeles Lakers.

None of that seemed relevant Tuesday, nor did the Miami win over Dallas for the title five years ago, either.

Wade — the hero of that 2006 championship — found himself with a couple extra minutes before tipoff because of an unusually long delay after the starters were introduced. So he went looking for inspiration. He screamed at his teammates, “Don’t say, ’I wish I woulda,”’ in the huddle before they took the court, his way of telling them not to leave anything in the proverbial tank during this series.

And then he slowly trotted to the other end of the court, pointed to his mother Jolinda in a baseline seat and gave her a hug as many in the crowd roared.

After that, if those fans like offense, there wasn’t much for them to get excited about for a while.

Both teams expect to ride defense in this series, and that was made perfectly evident in the opening 12 minutes. The teams combined to take 35 shots in the first quarter — and made 10.

Dallas led 17-16 after the first quarter, which was the lowest two-team output in the first quarter of Game 1 of a finals in the shot clock era, according to STATS LLC. It tied the fourth-lowest total for any finals quarter since 1955, bettering only the 30 points by the Magic and Lakers in Game 2 in 2009, and the 31 posted by the Jazz and Bulls in 1998’s Game 3 along with the Lakers and Celtics in 1969’s Game 4.

Everyone was struggling, maybe a little because of nerves, and mostly to do with the defensive intensity on both ends. James was 3 for 6 in the first quarter, while the rest of the Heat were 3 for 15. Half of Dallas’ four first-quarter baskets were 3-pointers by Kidd, the team’s 38-year-old point guard searching for his first NBA title.

Nowitzki made his first shot, a jumper 1:21 into the game. He missed his next four, not making another field goal until 3:59 remained in the first half. And the Mavericks had exactly one — that’s right, one — 2-point basket in the game’s first 15:49, with 10 of their first 18 field goal attempts coming from 3-point range.

Neither team led by more than six points in the first half, after which Dallas led 44-43 behind 13 from Nowitzki and 12 from Terry. Chalmers had 10 in the first half for Miami, all three of his field goals coming from 3-point range.

Dallas opened the third quarter by scoring seven quick points, all on jumpers, the burst ending with DeShawn Stevenson’s 3-pointer with 10:03 remaining in the period — pushing the Mavericks’ lead to 51-43 and silencing a building that was still re-filling after halftime.

The rest of the third was largely all Miami.

The Heat outscored Dallas 22-10 in the remainder of the quarter. Wade started the rally — just as he did in a series-saving effort for Miami in Game 3 of the ’06 finals, giving the memorable “Nah, I ain’t going out like this” quote afterward — with two layups. And James beat the clock at the end of the period with an off-balance 3-pointer from near the Dallas bench for a 65-61 Miami lead, the largest for the Heat since the opening minutes.

They would not trail again, remaining perfect at home, and knowing they need only stay that way to win a title.

NOTES: In his annual state-of-the-league address before Game 1 of the finals, NBA Commissioner David Stern was asked about a number of topics, including again about how James, Wade and Bosh all ended up in Miami last summer. “I don’t consider it colluding,” Stern said. … James picked up two fouls in the first quarter, the fourth time that’s happened in the playoffs. It happened four times in the entire regular season. … In a scene reminiscent of the 2006 NBA finals, the first time Wade went to the foul line Tuesday night, Mavs owner Mark Cuban stood to argue that he traveled. … Juwan Howard was guarding Kidd after a switch on a screen in the first half, odd only because both were top-five picks in the 1994 NBA draft. … Celebrities with tickets included U.S. Sen. Marco Rubio of Florida, Ludacris, Jerry Bruckheimer, Timbaland, Queen Latifah, Serena Williams and Jimmy Buffett.