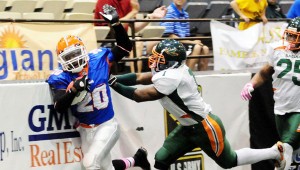 Huntington Hammer Dray Mason (20) races down the sidelines as a Saginaw defenders shoves him into the wall in an attempt to stop the play. Huntington won to qualify for the UIFL playoffs. (The Ironton Tribune / Kent Sanborn of Southern Ohio Sports Photos.com)

HUNTINGTON, W.Va. — For the Huntington Hammer, the playoffs have already started.

Facing a must-win scenario, the Hammer clinched the final playoff berth with a 49-25 win over the Saginaw Sting in the regular season finale Sunday afternoon in the Ultimate Indoor Football League.

The Hammer was seemingly in a playoff scenario of win or go home as a result of a Johnstown win at Canton on Friday. Johnstown held the tie-breaker since the teams had identical records by winning two of three games in the regular season.

“I told the guys all week, the ball is in our court,” said Hammer head coach Michael “Kool-Aid” Owens. “We came together the second half and played as a team.”

Saginaw (9-5) came into the game as the top seed in the playoffs as a result of front office infractions by Northern Kentucky earlier in the week. As a result, the Sting held starting quarterback Tommy Jones out of action not wanting to risk injury.

Huntington started the scoring, as Martevious Young would punch in from three yards out. Wes Sherrill’s extra point gave the Hammer the 7-0 lead early in the opening period.

Young turned in his most impressive performance of the season by completing 18 of 24 passes for 180 yards and tossing two touchdown passes. He also ran for three scores.

The defense got into the act as Andre Portis sacked Andrew Beaver in the end zone for a safety to extend the lead to 9-0 for the Hammer.

Saginaw struck back and make the game interesting late in the second quarter, as Beaver would find Zac Nichols for a 20-yard touchdown strike to cut the Hammer lead to 22-16 at halftime.

The turning point of the game came during the first play of the second half as the Hammer defense made another defensive stop.

Beaver hit LaVaughn Macon on a sit down pass and turn up field for a gain of 12-yards. While being tackled, the ball popped loose and Hammer defensive back Jerett Sanderson fell on the ball to for the first turnover of the game.

The Hammer capitalized on the on the turnover as Young found the end zone again by sneaking in from one-yard out to give Huntington a 29-16 lead.

Huntington put the game away late in the third period when Young found Thomas Riley for a 30-yard touchdown strike to push the lead to 36-23.

Riley finished the game with six receptions for 86-yards to lead all receivers.

“I just try to do my job. If the ball comes my way I try to make a play,” said Riley.

The first semifinal game will be on Friday night as the Northern Kentucky River Monsters travel to Saginaw.

Huntington will travel to Pikeville, Ky. on Saturday to square off with the Eastern Kentucky Drillers in the other semifinal contest. Kickoff is set for 7:30 p.m.

BOSTON (AP) — He was a prolific producer of rebounds and record albums. And nicknames, too, as if at 7-foot-1... read more