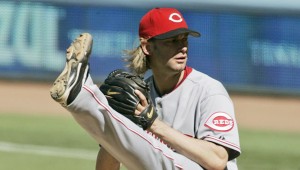 Cincinnati pitcher Bronson Arroyo looks to bounce back from last Saturday’s bad outing against Atlanta as the Reds host the Los Angeles Dodgers Friday to begin a three-game series. Arroyo says he has recovered from a mild muscle strain. (The Ironton Tribune / MCT Direct Photo)

CINCINNATI — The Cincinnati Reds got a much-needed off day following an exhausting stretch of schedule. The Los Angeles Dodgers hope their one-day break will help them get back to their recent high-scoring ways.

The clubs meet for the first time this season when Cincinnati’s Bronson Arroyo and Los Angeles’ Hiroki Kuroda both try to avoid a third straight loss Friday night.

Cincinnati (29-28) closed a stretch of 20 consecutive days with a game Wednesday, defeating Milwaukee 4-3. The Reds have gone 4-11 in their last 15 to complete the grueling stretch at 9-11.

“It’s been a long ride here, physically, mentally and emotionally,” manager Dusty Baker told the team’s official website. “(The players should) go swimming, spend some time with your kids, if they’re here.”

The Dodgers (26-31) opened a 10-game trip by managing a season-low four hits — all singles — in a 3-0 loss to Colorado on Wednesday. Los Angeles scored 23 runs while winning its previous three games.

“We’re pretty confident that our pitchers will keep us in the game,” manager Don Mattingly told the team’s website. “But we’ve got to get one here, one there and not worry about trying to get three.”

Casey Blake, who has a homer and five RBIs in five games since coming off the disabled list, batted .346 with six RBIs as his club split six games in Cincinnati last season. The Dodgers averaged 7.8 runs in those contests.

In a 7-6, 12-inning loss at Atlanta on Saturday — Arroyo’s first outing since an MRI revealed a minor muscle strain in his back — he allowed five runs and nine hits over three innings.

“Physically, I felt as good as I have all year, by far,” Arroyo said. “… It’s just a mixture of command and getting hit on some pitches and the ball not rolling your way.”

Arroyo might be facing the right opponent as he looks to get on track. He went 2-0 with a 1.93 ERA in two starts against Los Angeles in 2010.

Kuroda (5-5, 3.50) also enjoyed success in this matchup last season, improving to 3-0 with a 2.41 ERA against the Reds by winning two starts in Cincinnati.

The right-hander, however, has posted a 7.36 ERA in losing his last two starts. He matched season highs with five runs and 10 hits allowed in a 6-1 defeat to Florida on Saturday.

Reds right fielder Jay Bruce has batted .417 with nine homers and 22 RBIs in the last 14 games. Teammate Joey Votto hit .382 with four home runs and 13 RBIs against Los Angeles in 2010.

Dodgers center fielder Matt Kemp had four homers and a team-high nine RBIs against the Reds last season. He has gone 6 for 17 with two home runs versus Arroyo.

These clubs have split the last 12 meetings.

By JIM WALKER Tribune Sports Editor COAL GROVE — Greg Bender is where he wants to be. Now he just... read more