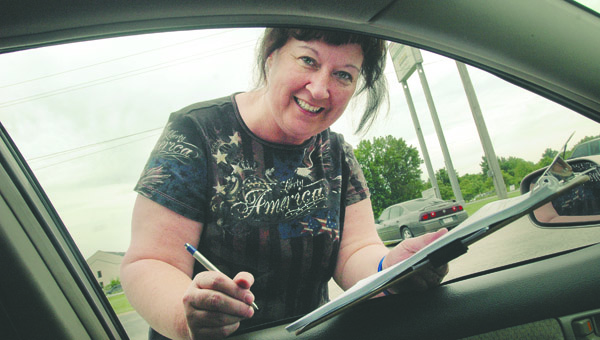 Karen Bailey, of Kitts Hill, approaches vehicles in the former K-Mart Plaza parking lot as residents put their names on the growing list to put a referendum to overturn Senate Bill 5 on the November ballot.

The ink was barely dry before the fight began.

On March 31, Ohio Gov. John Kasich signed into law a bill that galvanized a grassroots fight to erase what has been blasted as a union-busting measure. It was a signature that was heard around the state.

Senate Bill 5, known colloquially as SB5, limits the collective bargaining rights of 350,000 Ohio public employees. It stops unions from negotiating wages, instituting automatic raises and calling strikes. Workers would have to pay at least 15 percent of their health insurance.

Those affected? Teachers, nurses, police, firefighters, corrections officers and many other government workers.

Those angry? See the above.

From the beginning Kasich has defended SB5 saying on the night he signed it, “This bill … does not cut anybody’s salary …. does not take away anybody’s pension …. does not destroy anybody’s health care. And anybody who’s been out there saying that is just factually wrong.”

His words have not convinced everyone.

Kristi Hall of Ironton has never carried a union card, but her husband, Dewayne, a corrections officer, does. But that’s not the point.

That’s why she wants SB5 killed and any chance she gets, she goes out with petitions to get a referendum before the voters whom she believes will shoot SB5 down.

Statewide 231,149 signatures from registered voters must be collected and validated for the referendum to overturn SB5 to get on the ballot this November. That is six percent of the total number of those who voted in the 2010 gubernatorial election. Those signatures must be filed with Ohio’s secretary of state by June 30, whose office will then validate them.

On top of that 44 of the state’s 88 counties have another hoop to jump through. Each of those counties must have three percent of the signatures of those who voted in that election. In Lawrence County that number is 532.

That may not be a problem.

“I have had people come and knock on my door and say ‘I need to sign a petition,’” Hall said.

Right now she and her husband have turned in seven or eight petitions, each with the names of 70 registered voters, and have three or four more to turn in.

“Ninety percent are very supportive, but there are 10 percent who say ‘I hate unions,’” she said. “But it’s not all about unions. There is so much more that is hidden. I have tried to read it so many times, it is so long.”

Getting those names has meant sitting in the hot sun under a makeshift tent at the two-day Gus Macker basketball tournament, knocking on doors at Sherman Thompson Towers or working the parking lot at a Chesapeake shopping center.

All that came after an almost day long rally that kicked off the petition drive in downtown Ironton back in April.

Take the Halls’ work and multiply it over and over and those numbers may give the supporters what they want.

“(The number) of people we are getting is way over the amount we were expecting, double and triple,” Cherice Keyser, coordinator for the Shawnee Labor Council, AFl-CIO, said. “People are very supportive. We have been running robocalls, putting out the word to registered voters. People are looking for places to sign.”

Tallies for all eight are still tentative, but Keyser said it is more than the six percent the council sought in each county.

In Lawrence County three events this past week brought in 850 signatures, Keyser said.

“We have double what we need in our jurisdiction,” she said.

That’s the kind of support Sgt Pam Wagner, president of FOP Local 75, is seeing as she and others run a local campaign.

“We have actually got some really, really positive feedback,” Wagner said. “ When we did the (kickoff) labor rally, we had people come as far as Proctorville and Miller. We have had an outstanding reaction to it.

“In this part of the state, getting a good paying job is very difficult. Everyone wants to label this a union bill, but this affects people not in the union,” she said. “I know the propaganda is this is the anti-collective bargaining bill. But this affects people not in a union. One of the judges’ secretaries pays into PERS (retirement fund), but she is not in the union. This affects her retirement and health care.”

Whether it is a union bill or not, some observers see SB5 as reinvigorating organized labor, a movement that has steadily lost members nationwide since the late 1970s. In 1945 about a third of the U.S. workforce was organized. That dropped to about a quarter in 1979. Ten years later that statistics came in at 13 percent.

In Ohio, a strong union state, those statistics haven’t taken as steep a drop, but still have declined. At the first of this decade membership came in at 17.6 percent. However last year that figure dropped to almost 14 percent.

But the dedication of so many to get out petitions in the past few weeks has impressed one local union representative, Terri Robinson, president of AFSCME Local 3319 in Ironton.

“I am proud of the workers to get that many signatures and to get out the way these people are getting out to help preserve the right to bargain,” she said. “It may be the only good thing about SB5. It has been getting people out and reactivating the labor force.”