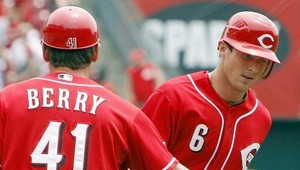 Cincinnati Reds' outfielder Drew Stubbs (6) gets a congratulations from third base coach Mark Berry after hitting a home run in Sunday's 9-6 loss to the Los Angeles Dodgers. (The Ironton Tribune / MCT Direct Photo)

CINCINNATI — At the end of another long afternoon, the Cincinnati Reds had hit a new low.

The defending NL Central champs fell back to .500 and dropped a season-high 5 1/2 games behind first-place St. Louis with another loss that was nearly 4 hours in the making. Dodgers pitcher Chad Billingsley drove in a career-high three runs with a homer, a double and a bases-loaded walk for a 9-6 win on Sunday.

The Reds have lost 13 of 18, a slide that has them well off the pace in third place.

“That’s just baseball,” outfielder Chris Heisey said. “No matter how good you are, you’re going to have a stretch where things don’t go your way, like the Red Sox at the beginning of the season. We’re .500, but I think we’re better. I know we’re better.”

Matt Kemp added a two-run homer — his third in a sequence of five at-bats — as the Dodgers got going right away. Billingsley (5-4) lasted only five innings, but helped himself build a big lead.

He hit a solo homer — the second of his career — in the second inning off Travis Wood (4-4). Billingsley drew a bases-loaded walk during the Dodgers’ three-run third, when Wood struggled to get his breaking pitches over the plate.

“He got to a 3-2 count on the pitcher, and you don’t want to walk him, but you don’t want to lay a fastball right down the middle, either,” catcher Ramon Hernandez said. “His breaking ball wasn’t working right.”

Billingsley’s RBI double to the warning track in right field ended Wood’s outing in the fifth and made it 8-4.

The Reds had one last chance. They loaded the bases on a pair of walks and a hit batter with none out in the ninth. Josh Lindblom, making his second big league appearance, retired Paul Janish on an infield fly, gave up a sacrifice fly to Heisey and fanned Drew Stubbs to finish it.

Los Angeles took two of three in the series, which included the Dodgers’ biggest comeback win of the season. They rallied from five runs down to an 11-8 victory in 11 innings on Saturday that featured Kemp’s solo homer, grand slam and season-high six RBIs.

Kemp’s two-run shot off Wood in the first inning gave him 16 homers overall, one shy of Cincinnati’s Jay Bruce for the NL lead. Kemp went 7 for 11 in the series with three homers and five walks.

Los Angeles won the last two games with long rallies, batting around three times in a span of seven innings. The Dodgers sent nine batters to the plate for three runs in the third.w

Rod Barajas doubled over third base with two outs for a pair of runs, and Wood intentionally walked James Loney to load the bases and bring up Billingsley. Wood walked him as well, throwing a full-count pitch off the plate.

The left-hander gave up a career-high eight runs in 4 2-3 innings, putting more pressure on the NL’s busiest bullpen. Reds relievers lead the league in innings.

Reds pitchers walked a season-high 10 batters on Sunday — two intentionally — and four of them scored. The Dodgers had at least one baserunner in every inning. They stranded 14 runners overall.

“We had a little bit of a tough time with the strike zone,” Cincinnati manager Dusty Baker said. “There were a lot of deep counts, and the pitcher drove in three runs. That was the difference in the ballgame.”

Stubbs hit a solo homer, and Joey Votto and Brandon Phillips drove in two runs apiece for the Reds.

Billingsley had a pivotal moment in the fifth, when the Reds got two runners aboard with two outs. The Reds sent up pinch-hitter Jonny Gomes, who was 5 for 7 against the right-hander with a homer. Billingsley got Gomes to line out to second baseman Aaron Miles.

NOTES: Billingsley’s other homer was a solo shot off Josh Banks in San Diego on July 5, 2009. … Baker moved RHP Chad Reineke into the bullpen on Sunday, clearing the way for RHP Edinson Volquez to return from the minors and start on Tuesday against the Cubs. Baker said it’s “a good maybe” that Volquez will be back. He was sent to the minors to fix his control problems. … 3B Scott Rolen got the day off. He’s got a bad cold and is in a 3-for-18 slump.

Heat holds on to edge Mavericks