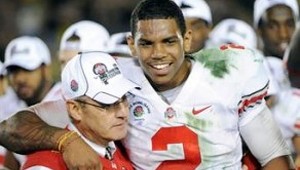 Ohio State quarterback Terrelle Pryor, a focal point of an NCAA investigation, announced he would not return to the school. ABOVE: Pryor hugs former Ohio State coach Jim Tressel who was forced to resign due to the investigation. (The Ironton Tribune / MCT Direct Photos)

COLUMBUS — Terrelle Pryor’s career at Ohio State, which started with so much promise and potential, came to an abrupt and scandal-ridden end.

The Ohio State quarterback announced through his attorney Tuesday that he would not play for the Buckeyes this season. He had already been suspended for the first five games for breaking NCAA rules by accepting improper benefits from the owner of a tattoo parlor.

“In the best interests of my teammates, I’ve made the decision to forgo my senior year of football at The Ohio State University,” Pryor said in a statement issued by Columbus lawyer Larry James.

Pryor will most likely make himself available for an NFL supplemental draft.

“I would hope so. Also, he would hope so,” said James, who added that Pryor was not available for comment. “But he’s going to take the next couple of days to get his head together.”

The NCAA is looking into all aspects of Ohio State’s once-glittering program, from cash and tattoos to players, cars deals for athletes and other potential violations.

Pryor’s announcement comes just eight days after Buckeyes coach Jim Tressel was forced to resign for knowing about the players’ improper benefits but not telling any of his superiors.

“He did not want to be a a distraction to his teammates,” James said of Pryor. “This is something he came to consider after much thought.”

“We understand Terrelle’s decision and wish him well in this next phase of his life,” Smith said. “We hope he returns to The Ohio State University one day to finish his degree.”

Luke Fickell, who will serve as Ohio State’s interim head coach in place of Tressel this fall, found out about Pryor’s decision on Tuesday night.

“I was notified this evening that Terrelle has decided to pursue a professional career,” Fickell said. “I wish him the best in his pursuits.”

Later Wednesday night, ESPN reported that a former friend of Pryor’s, who requested anonymity, claimed he saw the quarterback signing autographs for money a minimum of 35 to 40 times and that Pryor made between $20,000-$40,000 last year for doing so.

The former friend told ESPN’s “Outside The Lines” that Pryor was paid $500 to $1,000 each time he signed mini football helmets and other gear for a Columbus businessman and freelance photographer, Dennis Talbott.

ESPN reported Talbott twice denied that he ever paid Pryor or any other active Buckeyes student-athlete to sign memorabilia.

Pryor came to Ohio State on March 19, 2008, from Jeannette, Pa., as the most acclaimed high school quarterback prospect in the country. His career will be remembered in his adoptive home state for his three victories in as many tries against archrival Michigan, and victories in the Rose and Sugar Bowl.

But it will also be remembered for a series of missteps and controversies that seemed to follow the 6-foot-6, 233-pound physical specimen wherever he went and no matter what he said.

In the midst of an NCAA inspection into his cars, he drove a sports car to practice on the day that Tressel resigned. Even when it was shown that his mother had legally bought the car, which is four years old, many fans were angry. The fact that he was driving it made it headline news across the state and around the Big Ten.

On the field, Pryor was very good. He had a 31-4 record as a starter (starting one bowl game as a wide receiver), rushed for an Ohio State-record for a quarterback 2,164 yards and passed for 6,177 yards. He was often at his best in big games, holding the school record with seven games with at least 300 yards of total offense and 22 games with at least 200.

But there were other moments that kept him from ever becoming a fan favorite.

He wore “Vick” on an eyeblack patch in honor of Michael Vick in 2009, after the NFL quarterback had been involved in a dogfighting operation. Pryor then infuriated many by saying, “Not everybody’s the perfect person in the world. I mean, everyone kills people, murders people, steals from you, steals from me, whatever. I think that people need a second chance.”

After Wisconsin beat the Buckeyes in October, handing them their only loss last season, Pryor petulantly said that Ohio State could beat the Badgers nine out of 10 times.

Few NFL draft experts consider Pryor to be a ready-for-the-NFL quarterback. With his speed and size, he might be better cut out as a big wide receiver in the mold of Plaxico Burress.

Despite the NFL labor problems, a supplemental draft could still be held this summer, although no one has yet committed to entering it. Former Ohio State star Cris Carter went that route after he lost his senior season due to NCAA infractions involving an agent and he went on to a stellar career as one of the best receivers in NFL history.

Ohio State will go before the NCAA’s committee on infractions on Aug. 12. With Tressel no longer with the program, along with Pryor who has been the most visible of those who were suspended, it was no surprise that Buckeyes fans expressed relief at Pryor’s surprise announcement.

The Buckeyes have several choices to take Pryor’s place. The most experienced player is fifth-year senior Joe Bauserman, with Kenny Guiton, Taylor Graham and talented freshman Braxton Miller competing for the job. All four got plenty of snaps in spring practice, since Pryor missed the April workouts after having surgery on his right ankle in January.

With Pryor no longer a college football player, he is no longer obligated to meet with the NCAA.

James would not comment on whether Pryor would continue to cooperate with the NCAA.

James said that Pryor was reflective when he made the decision to quit college football.

“You know how sometimes you have the weight of the world on your shoulders and then something like this takes a little bit off?” James said. “He’s still only 21.”

The Associated Press CINCINNATI — Edinson Volquez was in control in his return to the Reds’ rotation. Backed by Miguel... read more