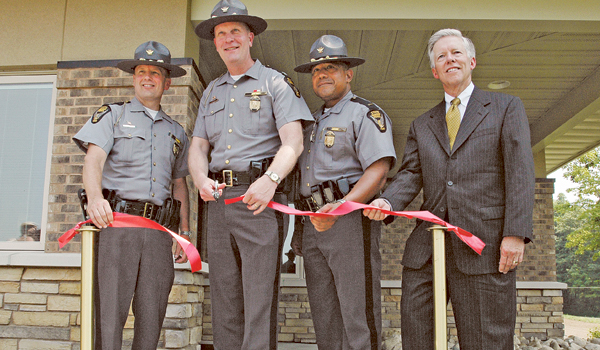 Many highway patrol retirees and members of the community gathered for a ribbon-cutting ceremony at the post’s new South Point facility.

“It all began with a need and anyone serving in the old post can certainly say amen to that,” Rev. Richard Ellsworth, a chaplain with the Ohio State Highway Patrol, said during the invocation. “The new facilities were needed and the need then led to a vision… today we see the new facilities here in this beautiful site and we know that this is more than just a building made with stone and plaster and wood and glass. It’s a home.”

Lt. Michael Gore recognized many of the highway patrol retirees that came for the ceremony. A luncheon was held in their honor after the ceremony.

The guest speaker for the ceremony was Col. John Born, a superintendent for the OSHP. Born spoke both about the history of the highway patrol and its current goals.

The post’s first location opened In Coal Grove in 1946, Born said. After that it moved to Ironton before moving again to South Point.

“For those here today who remember it, look at what we now have,” Born said. “The reason we have that is because of the tradition, legacy, the sacrifice of many of you here today.

So far in 2011, there have been 50 fewer fatalities on Ohio roads than at this time last year, he said.

Ted Riedel is seen on the back of his truck that displays the Vietnam Veterans Memorial. Every year during Memorial... read more