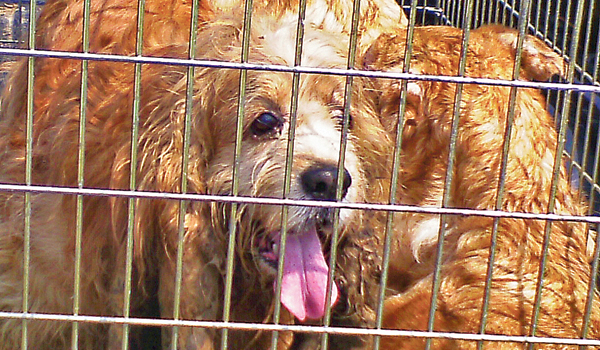 Dog warden George Wilson said of his experiences at the job, this animal cruelty case and the conditions the animals lived in were especially bad.

“(Officer) Aaron (Fradd of SPPD) and I, looked through there and I actually gagged,” Wilson said. “This lady shouldn’t even be in there… I’ve done Ironton seven or eight years and that one there is the worst I’ve ever seen.”

Of the three dogs, one of them, a lab mix, had a tumor growing from its head that was bigger than its head, Wilson said. Another, a spaniel, had badly matted fur and was underweight by 30 or 40 pounds, Wilson said.

The third, a chow mix, seemed to be in good condition, he said.

Fradd said the woman’s house was unlivable. All three of the dogs were kept inside and the woman was not able to clean up after them, Fradd said.

“We’re going to contact adult (protective) services soon to see if they can help,” he said.

One of the woman’s neighbors contacted police after seeing the dogs placed outside, Fradd said.

Wilson said two of the dogs had to be put down but one, the chow mix, is adoptable.

Group votes 5-2 in favor of plan A $1.4 million water meter replacement project for the City of Ironton was... read more