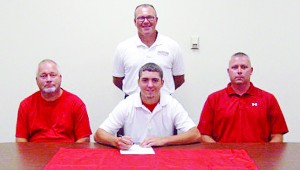 AID — Rio Grande head coach Brad Warnimont has a strong program that he thinks has been made stronger with the addition of Symmes Valley Vikings’ outfielder Luke Taylor.

And now that Taylor is a member of the RedStorm team, he only wants to get stronger along with the program.

“Luke is a talented young man with a great deal of potential,” said Warnimont. “As he gets bigger and stronger his impact in the program should increase.”

“I would really like to improve on my overall strength as a player to help myself excel,” said Taylor.

“I knew coach Warnimont from fall baseball and I enjoyed the fundamentals he taught. I am very excited to be signing with Rio. I hope to be a good addition to the team.”

Taylor was named to the Southern Ohio Conference second team as a sophomore and first team as a junior and senior. This past season he was the SOC Player of the Year. He was also first team the past two years on the coaches’ all-district team.

The 6-foot, 180-pound Taylor has set simple goals for himself at the college level.

“My goals for the next four years are to work hard and be an important asset to this team,” said Taylor.

Luke — who plans to major in medical sonography — is the son of Benny and Terri Taylor of Pedro.